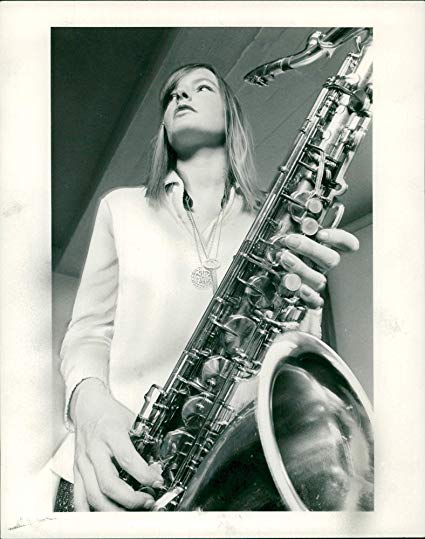 Barbara Gracey Thompson MBE, born 27 July 1944 in Oxford, is an English jazz saxophonist. She is also a flutist and composer. At the Royal College of Music she studied clarinet and flute, classical composition, and piano. But, the music of John Coltrane and Duke Ellington influenced her to focus on jazz and saxophone. She has been married to Jon Hiseman, drummer at Colosseum, since 1967. Thompson was a member of Neil Ardley’s New Jazz Orchestra in 1970 and featured on Colosseum albums. She was part of the founding of three bands, United Jazz and Rock Ensemble. This included Wolfgang Dauner (p), Volker Warel (g), Albert Mangelsdorff(tb), EberhardWeber (b), Ian Carr, (tp), Charlie Mariano, Ack van Rooyen, Jon Hiseman, and Eberhard Weber. Barbara Thompson’s Jubiaba (9-piece Latin/rock band), including Peter Lemer and Roy Babbington. Henry Lowther. Ian Hamer. Trevor Tomkins. Bill Le Sage. Glyn Thomas. Barbara Thompson’s Paraphernalia is her current band, which includes Billy Thompson (v), Jon Hiseman (b), and Dave Ball (b). In 1996, she was awarded the MBE for her services to music. In 2001, she was diagnosed with Parkinson’s disease and retired from active saxophonist. After a time of working exclusively as a composer, she returned to the stage for Colosseum’s 2003 “Tomorrow’s Blues tour. [8] In 2005, she performed live with Paraphernalia during their “Never Say Goodbye!” tour. She has been a Colosseum member since 2004. Thompson worked closely with Andrew Lloyd Webber [5] on musicals such as Cats, Starlight Express, and his Requiem. She has composed music for television and film, as well as classical compositions. She will be well-known to many people, even if her name is not on the list. This is because she played the incidental music for the ITV series A Touch of Frost, which starred David Jason. She was also a flute player on Jeff Wayne’s Musical Version of The War of the Worlds. Thompson was married to Jon Hiseman, a Colosseum drummer, since 1967. Their son Marcus was born 1972 and their daughter Anna, now known as singer/songwriter Ana Gracey, in 1975.