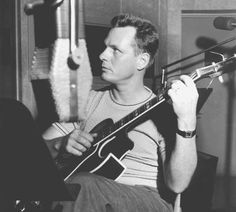 Joseph Barry Galbraith, born December 18, 1919 in Pittsburgh, Pennsylvania, and died January 13, 1983 in Bennington (Vt), was an American jazz guitarist. Galbraith, who moved from Vermont to New York City in the early 1940s, found work as a jazz guitarist playing with Babe Russin and Red Norvo, Hal McIntyre and Teddy Powell. After serving in the Army, he played with Claude Thornhill from 1941 to 42 and again from 1946 to 49. In 1953, he toured with Stan Kenton. Galbraith worked extensively as a studio musician at NBC and CBS during the 1950s and 60s. He played with Miles Davis and Coleman Hawkins, Tal Farlow and Coleman Hawkins. On record, he also accompanied Dinah Washington, Billie Holiday and Chris Connor. He appeared in After Hours in 1961. He appeared in After Hours from 1961 to 1964 on Gil Evans’s album, The Individualism Of Gil Evans. In 1965, he was featured on Stan Getz/Eddie Sauter’s soundtrack to Mickey One. He taught guitar at CUNY from 1970 to 1975 and published a book on the subject in 1982. Galbraith was a New England Conservatory guitar teacher from 1976 to 1977. Text contributed by users is available under Creative Commons By–SA License. It may also be available under GNU FDL.