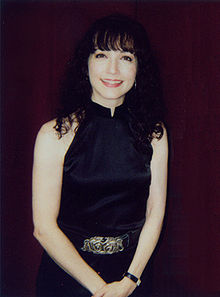 Beatrice Neuwirth (or “Bebe”) is the daughter Sydney Anne Neuwirth, an artist, as well as Lee Paul Neuwirth a mathematician. She was born in Princeton, New Jersey and trained as a dancer. Her New York career began in “A Chorus Line”. For her role in Sweet Charity, she won a Tony Award and an Emmy Award as Outstanding Supporting Actress In a Comedy Series (1982). Education: She graduated from Princeton High School in Princeton, New Jersey in 1976. She majored in dance at The Juilliard School in New York (New York, New York 1976-7) and was awarded the Best Actress (Musical), in 1986, for her role as Nicki in a revival “Sweet Charity.” In 1997, she won the Best Actress (Musical), for her performance as Velma Kelly in “Chicago.” She raises money for stray dogs and cats. She danced with the Princeton Ballet Company. She was offered many roles on TV and film after Cheers (1982) ended. She was offered the role of Lilith on the Cheers (1982), spin-off, Frasier (1993), but she declined it so that she could return to Broadway. Instead, she did guest spots on the show. She claims that the role of Judy Davis’ hooker in Woody Allen’s Celebrity (1998) was created specifically for her. She has won two Emmys and two Tonys, two Drama Desks as well as an LA Drama Critics Circle award. Chris Calkins, her husband, is the founder and CEO of Destino vineyards. She is Jewish. In 2006, she had her hip replaced. She played Dr. Lilith Sternin in three series: Cheers (1982), Wings (90) and Frasier (1993). Filming Le divorce (2003) in Paris. [March 2002] I joined Law, a new program.