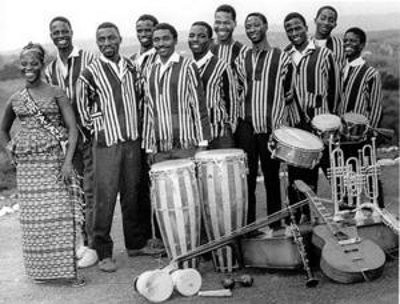 Bembaya Jazz National, a Guinean jazz band, is best known for their afropop beats and infectious music. They are one of the most important bands in Guinean music. Their recordings often draw on traditional music from Guinea and are fused with jazz and Afropop. The band features guitarist Sekou Diabate ‘Diamond Fingers’Diabate. He was raised in a traditional griot family and gained popularity in Conakry (Ghana’s capital) during the turbulent days of the country’s independence. Bembeya Jazz experienced difficult times in 1980s. The band disbanded after a few years. However, it was reformed in late 1990s and has been touring Europe and North America since the early 2000s. Numerous bands emerged in the country after the 1958 Guinean Independence and encouragement of cultural pride. State-supported orchestras were the first to start dance bands. These included well-known groups such as Lanaya Jazz and Keletigui Et Ses Tambourins. Bembeya Jazz National was founded by Aboubacar Demar Camara in 1961. Bembeya Jazz National, which specializes in modern arrangements of Manding traditional tunes won the first two national Biennale Festivals in 1962 and 1964. It was also crowned National Orchestra in 1966. Bembeya Jazz National was initially a seven-piece ensemble with a Latin-flavored horn section consisting of clarinet, trumpet and saxophone. In 1966, the group expanded to include electric guitarist Sekou Diabate and Sekouba Mabino Diabate (no relationship). Bembeya Jazz National maintained a loyal following in Guinea, despite being banned from touring abroad until the mid-’80s. Regard Sur Le Passe was the most ambitious album by Bembeya Jazz National. It was released in 1968 as a musical tribute in honor of Samory Toure who established the Mande kingdom back in 1870. 10 Ans De Succes is a live album that was recorded at a 1971 concert. Camara died in an automobile accident while on his way to Dakar in 1973. This was a setback for the band. Bembeya Jazz National failed to replicate their early success, even though they stayed together for eight more years. In 1991, the group broke up with Sekou and Sekouba Bambino dibate moving on to their solo careers. It was reformed in late 1990s, and has since toured Europe and North America during the 2000s. Text contributed by users is available under Creative Commons By–SA License. It may also be available under GNU FDL.