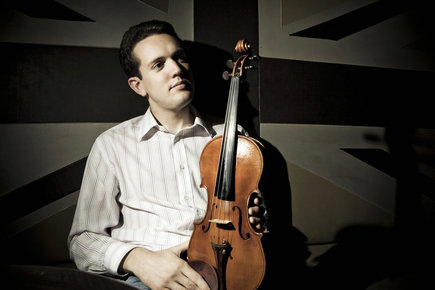 Ben Powell, a brilliant young violinist, has already had a few musical lives in his 23-year-old years. In some ways, he is only just getting started. “Ben Powell, who has followed in the footsteps Stephane Grappelli’s footsteps, has developed an incredibly personal and inspired voice on the violin. His thoughts flow freely and are expressed in all kinds of music. Joe Lovano Ben Powell was raised in Cheltenham in England to a musical family. His mother is a Suzuki violin teacher, and his father is a cellist with the City of Birmingham Symphony Orchestra. Ben began playing the violin at two years old, after his mother taught him. His talent was evident from an early age, which led to an invitation to solo at 1998 Nagano Winter Olympics in Japan. He performed at the Kennedy Center as well as on the steps of U.S. Capitol Building with the National Isis Strings Academy of Great Britain in 1999. At 14 years old, he was invited soloist on a European Suzuki tour to France, Belgium, Holland, Holland, and Germany. At age 16, Ben was placed in the National Youth Orchestra of Great Britain, his first major orchestral experience. Ben was a member of the orchestra for three years and worked under many internationally-respected conductors, including Sir Roger Norrington, Yan Pascal Tortelier, and Marin Alsop. Ben was a member of the National Youth Orchestra and toured all major concert halls in the UK, culminating each year with a televised Prom at London’s Royal Albert Hall. Ben was promoted to the rank of principal second violinist in his third and last year with the orchestra. Ben, unlike classical musicians, developed a strong interest and ability to play jazz improvisations. He was a teenager when Stephane Grappelli introduced him to his music. “I had been playing the violin orally for six to seven years so I was comfortable with jazz and improvising. Stephane’s playing was very relatable to me. I learned the techniques of jazz and improvisation from classical music. Jazz is all about what I feel. “I didn’t have to change my style or approach.” Since his 2001 invitation to perform for Randy Brecker, Ben has shared the stage with jazz legends like Herbie Hancock and Steve Gadd. Ben received a scholarship in 2005 to Berklee College of Music, Boston. He is currently finishing his degree in jazz composition. Ben also enjoys playing in Boston Philharmonic Orchestra. Soloist Ben has performed all over the globe, including in Turin, Italy, Munster, Germany, San Francisco, Boston and Washington DC. Ben performed solo in 2005 in London’s Queen Elizabeth Southbank Complex’s Purcell Rooms. He also performed for Laura Bush, the First Lady of America, and Her Majesty Queen Noor from Jordan. Ben was honored to meet Muhammad Ali, ‘The Champ’ in 2007 in recognition of his musical outreach efforts within the city of Louisville. www.ben-powell.com