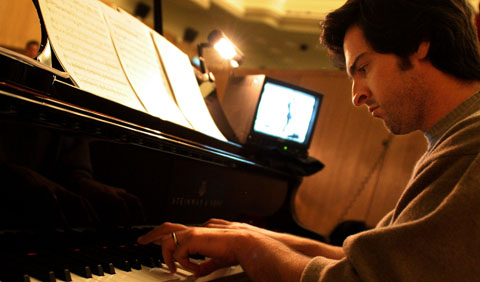 Bernardo da Costa Sassetti Pais (24 Jun 1970 – 10 Mai 2012) was a Portuguese jazz pianist, film composer and musician. Sassetti was born at Lisbon. He was the great-grandson Sidonio Pais (President of the First Republic). At age nine, he began playing guitar and then started studying music theory and piano. After hearing Bill Evans, he became interested in jazz. He was teaching jazz piano in Lisbon and backing visiting musicians by the end of the 1980s. He recorded three albums in London with Guy Barker’s band during the 1990s. Anthony Minghella invited them as The Talented Mr. Ripley’s Napoli Jazz Sextet. Unreal: Sidewalk cartoon, his 2006 album, received a rating of four stars (out of a possible four) by The Penguin Guide to Jazz (9th edition). He was also selected for The Penguin Jazz Guide: The History of the Music: The 1000 Best Albums. Sassetti is also a composer of many film scores. Bernardo Sassetti married Beatriz Batarda and had two children with her. After falling from a Guincho Cascais (Portugal) cliff, he died 10 May 2012. He was there to shoot pictures for his next book. Wikipedia