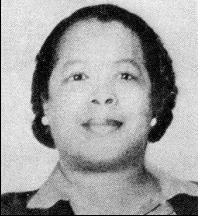 One of the better classic blues singers of the 1920s (and much less vaudeville-oriented than many of her contemporaries), Chippie Hill was one of the few singers of her generation to make a full-fledged comeback in the ’40s. One of 16 children, she started working in 1916 as a dancer before she became better known as a singer. She toured with Ma Rainey’s Rabbit Foot Minstrels and went on to become a solo performer on vaudeville for a long period. Hill settled in Chicago in 1925 and recorded regularly for a few years. After working steadily in the Chicago area until 1930 (including touring with Lovie Austin), she eventually left music to raise seven children. Hill occasionally sang during the next 15 years (including with Jimmie Noone) but mostly worked outside of music. She was rediscovered by writer Rudi Blesh in 1946, working in a bakery. Appearances on Blesh’s This Is Jazz radio series resulted in her coming back to the music scene, performing at the Village Vanguard, Jimmy Ryan’s and even appearing at Carnegie Hall in 1948 with Kid Ory. She sang at the Paris Jazz Festival, worked with Art Hodes in Chicago, and was back in prime form in 1950 when she was run over by a car and killed. Chippie Hill, who introduced Richard M. Jones’ “Trouble in Mind” in 1926, recorded 23 titles during 1925-1929 with such sidemen as Jones, Louis Armstrong, Shirley Clay, Georgia Tom Dorsey, Tampa Red, and Punch Miller. She also recorded nine selections on two dates in 1946 with Lee Collins, Lovie Austin, Baby Dodds, and Montana Taylor. from allmusic