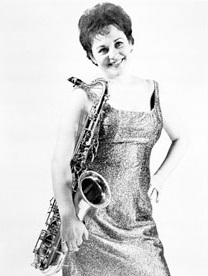 British tenor saxophonist & singer. Born 6 July 1929; died 21 January 2011 Betty Smith, once billed as ‘the girl with sax appeal’, was always willing to come out front and play The presence of female instrumentalists in jazz ensembles is no longer a matter for comment, but half a century ago it was far less usual. This made the achievements of the tenor-saxophonist Betty Smith, who has died aged 81, all the more remarkable. Where the occasional female trumpeter or saxophonist might be spotted playing section parts in a big band, Smith was always a soloist, ready and willing to come out front. During the 1950s she shone, playing Dixieland with the Freddy Randall band. Then, with the Best of British Jazz all-star mainstream outfit, she carved out a vital role for herself as both instrumentalist and vocalist. She later fronted her own bands, touring widely until she was incapacitated by illness. Smith was born in Sileby, near Leicester, and took up the saxophone as a nine-year-old, having already studied piano from the age of six. Impressed by her talent, a local benefactor paid for her to attend the private Stoneygate school nearby. As a teenager she was good enough to play at local clubs, and at 15, at her father’s instigation, she auditioned for Archie’s Juveniles, a travelling show featuring an all-girl saxophone septet. Immediately successful, and lured by the glamour of the road, Smith left school and embarked on a musical career. After performing for troops in the Middle East with the pianist Billy Penrose in 1948, she took a familiar route for female player, touring first with Rudy Starita’s all-girl band in Germany before joining the better-known Ivy Benson orchestra, another all-female ensemble. She met her future husband, the trumpeter Jack Peberdy, at her 19th-birthday party. They married in 1950 and joined the trumpeter Randall’s band the same year, Peberdy switching instruments to become its bassist soon afterwards. Randall’s Parlophone recordings show off Smith’s sinuous, tenor-saxophone sound and well-grounded swing style, reminiscent of American players such as Eddie Miller and Bud Freeman. Although their stay initially was brief, Smith and Peberdy worked full-time with Randall from 1953 to 1957, travelling the circuit of trad-jazz clubs and concerts, also journeying to the US in 1956. When Randall disbanded a year later, Smith formed her quintet (with Brian Lemon on piano and Peberdy on bass) and kept it going until 1964. In the US she performed on the same bill as Bill Haley’s Comets. There were also summer seasons in Guernsey and Cliftonville, Kent, and regular trips aboard the SS Franconia, plus a spell as accompanists to the comedian Tony Hancock. Smith’s group toured Australia and New Zealand and broadcast often, buoyed up by her bright personality, companionable vocal style and hard-swinging jazz approach. Later, she had her own programme on Radio Luxembourg and played and sang with the Ted Heath orchestra. By now as much an entertainer as a working jazz musician, and with a raunchy line in humour, she often appeared at clubs and festivals as a solo performer in Europe. There exists a video of her taking charge in vibrant fashion on After You’ve Gone with the Ted Easton band in the Netherlands, the American cornetist Bobby Hackett among the accompanists. Smith also worked regularly with Kenny Baker, the former Heath trumpet star. This association was cemented when Baker and two erstwhile Heath colleagues, the trombonist Don Lusher and the drummer and bandleader Jack Parnell, accompanied her in their Best of British combo. Smith stopped working after she became ill in the 1980s. Once billed as “the girl with sax appeal”, she died in a nursing home in Kirby Muxloe, Leicestershire. Peberdy survives her. from discogs