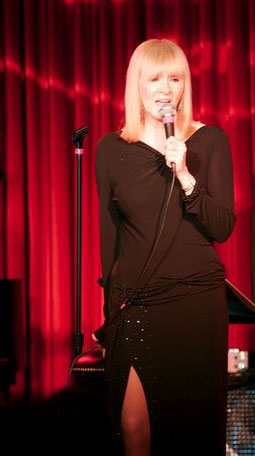 Beverley Church Hogan was born and raised in Montreal, Canada. At a young age, she began a beautiful journey. Whenever she sang on stage live or on radio, she became exhilarated with the audiences’ response by singing her way through the American Standard Song Book She lived next door to Oscar Peterson in Montreal, and was swept away as she listened to his practicing many hours on his magical piano. He gave her a gift without even knowing it. Beverley was enthralled with Anita O’Day, Ella Fitzgerald, Sarah Vaughn, Billy Eckstein & Tony Bennett among so many others that sang the American Standards their way. She knew then and there that she certainly had something to sing about. At 16 she became the Lead Singer in a show that toured some of the most elite Canadian and American Armed Force bases. She toured with this illustrious show, and its talented cast for five years, and she still to this day, remembers it as if it were yesterday. Beverley says, “There isn’t a better audience in the entire world like our young men and women in Uniform.” During the show’s hiatus, she appeared at some exciting Clubs and Beverley Hogan, Jazz Singer and Performer, Los Angeles private functions throughout Canada, US, and Mexico. She arrived in Los Angeles, and was offered some wonderful club dates. By choice, she took a long hiatus to raise her family, and now enjoys her time on stage once again. She has appeared at the Catalina Bar and Grill numerous times and enjoys working there because when she appears, the room becomes one big party night full of love and smiles. from www.beverleyhogan.com