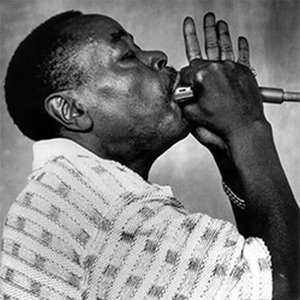 Blues harmonica virtuoso Big Walter Horton was renowned for his innovative contributions to the music of Memphis and Chicago. Horton was born in Horn Lake on April 6, 1918, and began his career as a child working for tips on the streets of Memphis. He performed and recorded with Muddy Waters, Jimmy Rogers, Willie Dixon, Fleetwood Mac, Johnny Winter, and many others. His technique and tone continue to be studied and emulated by harmonica players around the world. Walter Horton was heralded as one of the most brilliant and creative musicians ever to play the harmonica. Born on a plantation near this site, as a child he blew into tin cans to create sounds. His birth date is usually cited as April 6, 1918, although some sources give the year as 1917 or 1921. Nicknamed “Shakey” due to nystagmus, an affliction related to eye movement that can result in involuntary head shaking and learning disabilities, Horton quit school in the first grade. He made his way doing odd jobs and playing harmonica with local veterans such as Jack Kelly, Garfield Akers, and Little Buddy Doyle as well as young friends Johnny Shines, Floyd Jones, and Honeyboy Edwards. They performed in Church Park, Handy Park, hotel lobbies, and anywhere else they could earn tips, including nearby areas of Arkansas, Mississippi, Missouri, and Tennessee. Horton began recording for legendary Memphis producer Sam Phillips in 1951. The first recordon Phillips’s Sun label in 1952 was assigned to “Jackie Boy and Little Walter” (Jack Kelly and Horton). While Sun never officially released the Kelly-Horton disc, other Horton tracks from Phillips’s studio appeared on the Modern and RPM labels under the name of “Mumbles.” Onlater recordings, Walter was usually billed as “Shakey Horton” or “Big Walter.” Horton joined the Muddy Waters band in Chicago in 1953. Chicago’s foremost blues producer/songwriter, Willie Dixon, who called Horton “the greatest harmonica player in the world,” began recording him for labels including States, Cobra, and Argo, and hired him to play harmonica on sessions by Otis Rush, Koko Taylor, Jimmy Rogers, Sunnyland Slim, and others. Horton also toured and recorded with Willie Dixon’s Chicago Blues All Stars, and played on the Fleetwood Mac album Blues Jam in Chicago. Full albums of his work appeared on several labels, including Alligator, Chess, and Blind Pig. Horton toured internationally, but in Chicago most of his work was in small clubs. He also resumed playing the streets for tips at Chicago’s Maxwell Street market. Horton’s playing–sometimes powerful and dramatic, other times delicate and sensitive–left an influence on harmonica masters Little Walter (Jacobs) and Sonny Boy Williamson No. 2 (Rice Miller) and on the generations to follow. His shy, gentle nature, often hidden beneath a gruff or glum exterior, endeared him to many. The uplifting beauty of Horton’s music contrasted with the sorrows and tragedies of his personal life. He died of heart failure on December 8, 1981. His death certificate also cited acute alcoholism. Horton was inducted into the Blues Hall of Fame in 1982. from https://msbluestrail.org