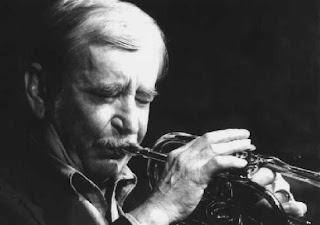 Inspired by his time with Duke Ellington, Bill Berry started leading big bands in Los Angeles in the early 1970s. After being discharged in 1955 from the Air Force, Berry studied at the Cincinnati College of Music as well as Berklee. Berry was a member of the Woody Herman and Maynard Ferguson big bands before joining Ellington (1961-1964). After leaving Ellington, Berry was with the Thad Jones/Mel Lewis Orchestra (1966-1968), and led his own New York Big Band. He also did studio work. Berry founded the L.A. Big Band in 1971 after he moved to Los Angeles. He continued to lead it on a part-time schedule for many decades. He also toured with Louie Bellson, and was involved in the Monterey Jazz Festival’s jazz education program. Bill Berry, a veteran trumpet player in the mainstream, has recorded many sets for Concord (with his small and big bands) Allmusic