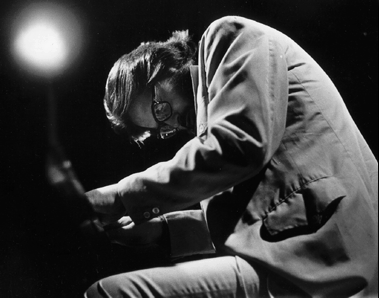 Bill Evans, born William John Evans on 16 August 1929 and died September 20, 1980. He is one of the most well-known jazz pianists of all time. He was, along with McCoy Tyner (and Oscar Peterson), the driving force behind jazz’s greatest evolution since Bud Powell and Art Tatum. He briefly worked with Miles Davis, and was the pianist for all but one of Kind of Blue (1959). Although “Blue in Green” was credited to Davis’s name, Evans claimed it was his original composition. Davis paid him $25 in compensation for the lost royalties years later. He won seven Grammys in his career, including the first for Conversations with Myself (1963), but not for Sunday At The Village Vanguard (1961), which he performed with Scott LaFaro, bassist, and drummer Paul Motian. His innovative interpretations of jazz music, his use of impressionistic harmony and his syncopated melodic lines were a major influence on a number of pianists including Herbie Hancock and Chick Corea. Bill Evans received a posthumous “Lifetime Achievement Award” from the National Academy of Recording Arts and Sciences in 1994. This award was given to him for his lyrical and impressionistic solo and trio recordings. These recordings were marked by an understated intensity, distinct chord voicings and unique harmonic sensibility, which helped open up jazz’s vocabulary.