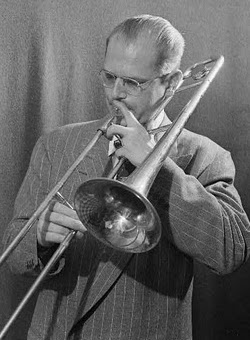 Bill Harris was one the few modern trombonists who were not influenced in the 1945-1960 era. Harris was a distinctive player from the beginning with a unique wit and strong technique. He became a professional musician in 1938 and toured with the major bands Ray McKinley and Gene Krupa. After performing with Charlie Barnet (1943-1944), and Benny Goodman (1943-1944), Harris was well-known for his work with Woody Herman’s First Herd (1944-1946). “Bijou”, which was a showcase for Harris’ talents, is where you can hear the trombonist at his most energetic (and sometimes riotous!) performances. Harris was one of few First Herd members who also participated in the Four Brothers Second Herd (1948-1950). He also re-joined Herman several times between 1956-1959. He was part of a band that Charlie Ventura led (1947), and he teamed up with Chubby (1953). He was also a major with Jazz at the Philharmonic between 1950-1954. Harris and Flip Phillips often collaborated during the second half the 1950s. Their band formed the nucleus for Benny Goodman’s 1959 group. After a stint in Las Vegas, Harris mostly settled in Florida in the 1960s. He occasionally led his own bands and played with Red Norvo. From 1945 to 1957, Bill Harris was the leader of dates for Mercury, EmArcy and Capitol, Verve. Fantasy, and Mode. Often, he was joined by alumni from The Woody Herman Orchestra. Allmusic