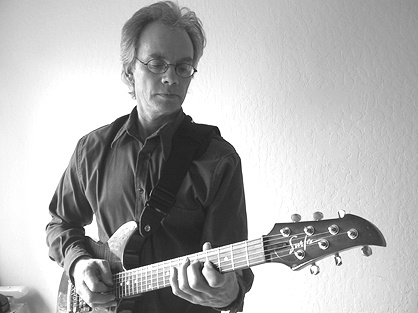 Bill Horvitz stretches the boundaries of guitar music and points it in new and exciting directions. Horvitz fuses traditional and extended techniques in a most inventive way; his strikingly personal instrumental vision endows the music with an infinite array of tonal color. His long and varied experience in the realms of jazz, rock, classical, folk, and new music have resulted in an entirely original compositional voice–a voice that is forceful and innovative, yet always intelligently accessible. Since 1974, Horvitz has led both large and small ensembles. Between 1978 and 1988, he lived and worked in New York City, where he explored and extended the sonic range of the guitar in a wide variety of settings. While in NYC, he led the quartet Living With Apparitions and was a member of the band The Public Servants. He has collaborated with many musicians and composers, notably J.A. Deane, Joseph Sabella, Butch Morris, Elliott Sharp, John Zorn, Bobby Previte, Shelley Hirsch, Denman Maroney, Herb Robertson, Roy Campbell, Richard Dworkin, David Hofstra, Harris Eisenstadt, Steve Adams, Sara Schoenbeck, Scott Walton, Tom Hayashi, George Cartwright, Phillip Johnston, Myra Melford, George Lewis, Bill Laswell, Dave Sewelson, Eugene Chadbourne, Frank London, and Walter Thompson. Between 1995 and 2007 he led the Bill Horvitz Band featuring Steve Adams on woodwinds and first, Joseph Sabella and second, Harris Eisenstadt on drums. The band recorded two CDs Dust Devil and The Disappearance. He has also worked with the improvising quartet Out by Five with Jon Raskin, George Cremaschi, and Garth Powell , the Harris Eisenstadt Ahimsa Orchestra, and Moe Staino’s Moekestra! In 2004 he recorded the CD Tuolumne Songs, compositions for solo acoustic guitar. Between 2006 and 2009 Bill composed the music for a 17-piece ensemble, The Bill Horvitz Expanded Band, in tribute to his late brother, Philip. The music has been performed in California and NYC to great acclaim. It was recorded in January, 2011 at Fantasy Studios in Berkeley, CA and will be released on CD in the spring of 2013. He also sings and plays guitar, banjo, and ukulele with his wife, songwriter, guitarist, pianist and composer Robin Eschner, in the folk band TONE BENT. TONE BENT has two CDs out: Say What You Will and Angels in the Kitchen, both available at www.tonebent.com Horvitz is a member of Take Jack, a nine-piece band of singers who play a wide range of instruments and perform original songs and arrangements in may styles. www.takejack.com His latest band is original instrumental trio, The Skerries, featuring Scott Walton on acoustic bass and Tom Hayashi on drums. Horvitz collaborates with poets and other writers, combining electric and acoustic music with spoken word. He has composed music for film, dance, art installation, and theater, most recently four plays with director John Shillington: Anatomy of Gray, (2008); Kingslover Stories (2010); Voice of the Prairie (2011); and Our Town (2012). from http://www.billhorvitz.com