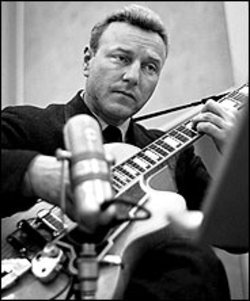 Born in New York in 1915, Billy Bauer was an established professional guitarist in New York at the time that players such as Johnny Smith and Jimmy Raney emerged. Before joining Woody Herman’s 1st Herd in 1944, he played with the Jerry Wald Band. In 1946, he was a member of the Benny Goodman and Jack Teagarden bands. While he was a strong rhythm player in these bands, Billy Bauer made a name for himself in smaller groups. These small groups were led by Bill Harris, Chubby Jackson and Lennie Tristano. This allowed Billy Bauer to establish himself as an important soloist in the growing bebop movement. These groups’ solo work has been cited as one of the finest examples of early bebop guitarist Billy Bauer. His solo playing is regarded as the most innovative in any era. His collaboration with Lennie Tristano around the mid 1940’s was undoubtedly some of the most innovative guitar playing to date. It is particularly interesting to note the trio and duet recordings Bauer recorded with Tristano in 1945. Tristano, Bauer had a natural connection in their musical style. Tristano’s complex arrangements were an ideal match for Bauer’s guitar. These examples showed that Bauer was more than a great guitarist. He was a master at unison with Tristano and his accompaniment to Tristano’s piano was one of the most impressive and early examples of guitar comping. In the 1950’s and 60’s, Billy Bauer continued to work with Lee Konitz on his guitar. Bauer, like Lennie Tristano found a musical friend in Konitz. Konitz’s avantgarde saxophone playing was an ideal match for Bauer’s advanced guitar. The recording Lee Konitz was a great example of this musical collaboration. They played in a variety of styles, from cool and bop to avant-garde. Duet for Saxophone u0026 Guitar was a unique instrument pairing that allowed Bauer’s exceptional musicianship to shine through. In 1956, Billy Bauer recorded a single under his own name. Plectrist placed Bauer front and centre throughout the recording, playing great jazz guitar. There have been many great jazz guitarists throughout history, but they are often forgotten for their immense influence. One of these is Billy Bauer. Bill Bauer is a great example of the cool jazz and bop guitars. Bill Bauer was a pioneer for guitarists such as Jimmy Raney and Lennie Tristano who brought the guitar, piano, and bass trio to a new level. from http://www.vervemusicgroup.com