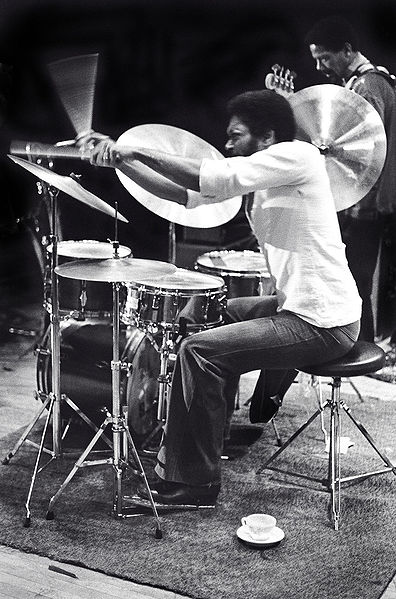 William “Billy” Hart, a jazz drummer and educator, was born November 29, 1940 in Washington, D.C. He has performed with many of the greatest jazz musicians ever. Hart was an early performer in Washington, D.C., where he performed with Otis Redding, Sam and Dave, then with Buck Hill, Shirley Horn, and as a sideman with Jimmy Smith (1964-1966), the Montgomery Brothers (1961-1966), and Wes Montgomery (66-1968). Hart left Montgomery’s funeral in 1968 to move to New York. He recorded with Wayne Shorter and McCoy Tyner and also played with Eddie Harris and Marian McPartland. Hart was part of Herbie Hancock’s sextet (1969-1973), and he played with McCoy Tyner (1973-1974), Stan Getz (74-1977), as well as Quest (1980s). Hart also did extensive freelance playing, including recording with Miles Davis for 1972’s On The Corner. Billy Hart, 70 years old, continues to work steadily and teaches extensively. Hart has been a regular visitor to the Oberlin Conservatory of Music since the 1990s. He is also adjunct faculty at Western Michigan University and the New England Conservatory of Music. Hart also teaches private lessons at The New School and New York University. Hart is a frequent contributor to the Stokes Forest Music Camp in Belgium and the Dworp Summer Jazz Clinic. He is part of a group that includes Ethan Iverson and Ben Street. He is also part of a trio that Jean-Michel Pilc leads and one that Assaf Khati leads. Hart lives in Montclair, New Jersey. From Wikipedia