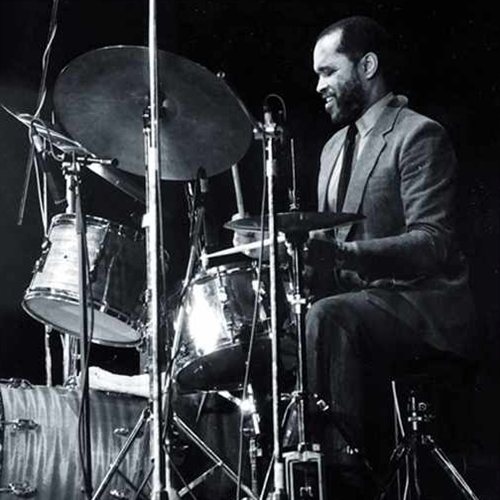 Billy Higgins (October 11, 1936 – May 3, 2001) was an American jazz drummer. He played mainly free jazz and hard bop. He played on Ornette Coleman’s first records, beginning in 1958. Higgins played on such important Coleman albums as Something Else!!!!:The Music of Ornette Coleman (1958), The Shape of Jazz to Come (1959), Free Jazz (1960) and Science Fiction (1971). In 1961 a drug bust stripped Higgins of his cabaret card, prompting him to exit from Coleman’s band. He focused on studio work, becoming the unofficial house drummer at Blue Note Records and working extensively with hard bop and other post-bop players, including Donald Byrd, Dexter Gordon, Joe Henderson, Milt Jackson, Jackie McLean, Pat Metheny, Hank Mobley, Thelonious Monk, Lee Morgan, David Murray, Art Pepper, Sonny Rollins, Mal Waldron, and Cedar Walton. He played on over 700 recordings, including recordings of rock and funk. After being featured in filmmaker Bertrand Tavernier’s 1986 jazz film ‘Round Midnight with Dexter Gordon, Higgins then reunited with Ornette Coleman’s classic band, which featured Don Cherry on trumpet and Charlie Haden on upright bass, resulting in a new studio album for Coleman. The following year Higgins teamed with poet Kamau Daaood to found World Stage, a cultural center in Los Angeles which hosted creative workshops, community activities, and live performances. He regularly used his extensive professional network to lure many of the biggest names in jazz to the World Stage site both as performers and as tutors, and ultimately Higgins turned his attention to teaching in a formal setting as well, serving on the jazz faculty at UCLA. Higgins spent much of the remainder of his life battling liver disease, a manifestation of a hepatitis contraction from decades earlier in his life. In March 1996, he underwent a liver transplant and when his body rejected the new organ, he was forced to submit to a second procedure just 24 hours later. Higgins nevertheless returned to music a few months later, traveling to New York to renew his collaboration with Coleman. However, by 2001 his new liver began to fail, and while waiting to find a donor, he succumbed to pneumonia on May 3. Higgins was just 64 years old at the time of his death. Higgins was divorced from wife, Mauricina Altier; and had four sons: William, Joseph, and David, and a step-son Jody. He also has a son, Benjamin. User-contributed text is available under the Creative Commons By-SA License and may also be available under the GNU FDL.