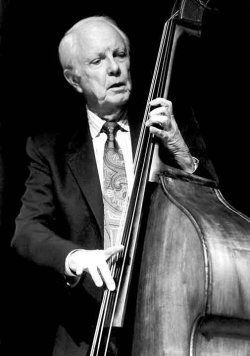 Robert Sherwood Haggart was born March 13, 1914 in New York City and died December 2, 1998 in Venice, Florida. He was a double bass player, composer, and arranger of dixieland jazz. He is often associated with dixieland, but he was actually one of the best Swing Era rhythm bassists. Haggart was the founder of the Bob Crosby Band (1935), and arranged and contributed to many of the band’s biggest hits, including “What’s New?” “, “South Rampart Street Parade”, My Inspiration”, and “Big Noise from Winnetka”. He remained with them until 1942. After leaving the band, he worked as a studio musician for New York. He recorded with Billie Holiday and Duke Ellington. Haggart, along with Yank Lawson organized a series of small-band recordings in the 1950s. He also composed many of the tunes that were included in Louis Armstrong’s 1956-7 four volume LP recreation set. This ensemble was also the core of many groups that Bob Crosby used, including the group that recorded Haggart’s arrangement of Porgy and Bess (1958). He was a frequent participant in Bob Crosby’s late 1960s bands. He was co-leader of The World’s Greatest Jazz Band (1968-1978), with Yank Lawson. Haggart toured the globe with his own bands and as a freelance musician in many jazz groups from 1978 to just before his death. His tutor for double basses was a classic text. Catherine O’Brien’s lyrics for his compositions “I’m Free” were approved by him. His original title was “What’s New?” “, and “My Inspiration”. Wikipedia