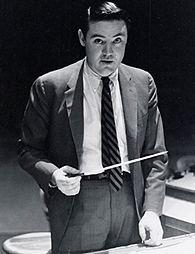 Bob Thompson (1924-2013), was referred to as “an overlooked genius in American pop music.” His Space Age Bachelor Pad records, which he made in the late 1950s, are his most well-known work. These unique discs have a distinctive sound that conjures up cocktail glasses, swingin’ men and women, and all-night mischief. Imagine Hugh Hefner or Austin Powers putting Bob Thompson records in their hi-fis. These albums contain radically rehipped standards as well as daring originals, which are spiced up with purring girls and mad percussion or propulsive Atomic Age sounds effects. Living Stereo LP covers are distinguished by their hot legs, cocktails and rocket ships. Bob’s 40-year career included countless TV commercials and stints as composer and arranger for Bing Crosby and Rosemary Clooney. He also created Just for Kicks and On the Rocks as well as MMM Nice! The Sound of Speed. from http://www.bobthompsonmusic.com