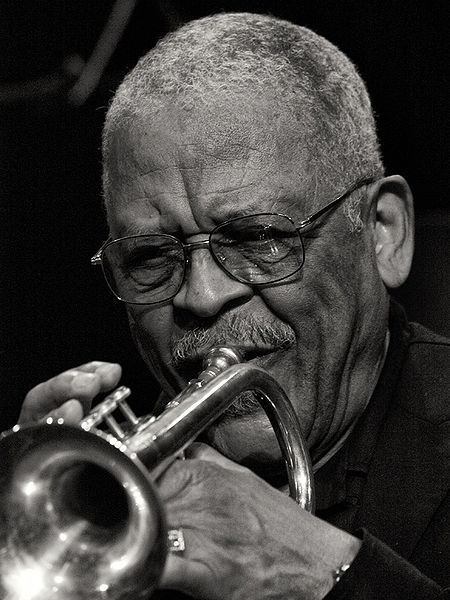 How can one begin to assess the numerous contributions of a great cornetist/trumpeter/ composer/bandleader/educator? How can one adequately give a tribute to an artist who has touched so many lives and is such a high-quality human being? Bobby Bradford is a person many of us have had the privilege of knowing for a long time. He has a powerful, probing intellect that can assimilate Jazz history in a unique way, drawing innovative and provocative conclusions. His teaching, playing, and compositions show his knowledge of Jazz’s history. His brilliant mind, upbeat wit, and ability to be two or three steps ahead has always impressed me deeply. He has, like Lester Bowie has, achieved an individualistic incorporation Louis Armstrong’s musical style and placed it within the context modern Jazz’s avantgarde movements. J.S. Bradford is a like Sonny Rollins and Ornette Coleman. Like Ornette Coleman and Bach, Bradford is a master at using musical sequences in his compositional and improvisational languages. Bradford, like Sonny Rollins has an extraordinary gift for musical memory. Bradford has a remarkable ability to organize his improvisations thanks to these gifts and an endless imagination. His solos are a marvellous example of musical architecture. His improvisational structures allow his listeners to explore and discover new things about themselves and him. His rhythmical vocabulary is diverse, and his lyrical leanings lend many of his solos an emotional depth only the best musicians can achieve. Bradford is Bradford, despite being a product of Louis Armstrong, Thelonious Montk, Fats Navarr, Charles Parker and Dizzy Gillespie. Los Angeles’ music scene was characterized by a unique musical sound. Bobby Bradford’s notes are impossible to mix with those of other trumpeters or cornetists. His sound is expressive and uses a little air. Sometimes it sounds like Paul Gonsalves or Ben Webster’s use of air. Bradford’s unique timbral language adds an emotional quality to his playing. It is not the “one sound fits all” approach. Bobby Bradford, like Horace Tapscott during his life, is an important mentor musically and personally for many people in the Los Angeles area. His Mo’Tet groups continue to inspire and develop younger and more mature musicians to this day. I first met Bobby Bradford in 1973 in Claremont, California while he was playing in Stanley Crouch’s group, “Black Music Infinity.” The front line of Black Music Infinity consisted of Bradford and alto/soprano-saxophonist Black Arthur Blythe. It was incredible to see the two of them together. It is one of the most powerful front lines I have ever heard. The ensemble grew eventually, with the addition of David Murray, Walter Lowe, Mark Dresser, and me. Bradford had a profound influence on the younger members of this ensemble. Although we were struggling to understand the difference between what we could articulate and the precious gold that flowed from Bradford’s cornet or Blythe’s alto sax, he treated us all as equals. I can see the imprint of Arthur Blythe and his influence on each of us. The Little Big Horn was established in Los Angeles by Bradford a few years later. Little Big Horn was able to escape the grim realities of segregation which characterized Los Angeles’ musical scene. It was a place of hope and determination for the most part. It was evident that Bradford was respected in many communities. This high standing was a force for unity. Bradford’s openness allowed musicians and listeners to have a sense of freedom not found in Los Angeles’ performance venues. John Carter, William Jeffrey and Roberto Miranda were joined by Vinny Golia and Mark Dresser. Tylon Barea and Diamanda Galas were also present. Tylon, Tylon, Tylon and Wayne Peet, Alex and Nels Clline, Allan Iwohara and Azar Lawrence were also able to share their artistic ideas. Bobby Bradford is also worthy of being discussed. John Carter, clarinetist and composer. Bobby Bradford and John Carter have performed together beautifully for many decades. Although musically, they were close friends. Their Texas roots were evident when they met to perform together, with both being masters in Texas-Bop Traditions and Blues. Their music was heavily influenced by the blues. The Texas roots were complemented by a strong focus on creating something new and unique in every performance. John Carter described it as “futuring”. The groups they formed were a perfect example of how an ensemble can produce a result that is greater than the sum of its parts. Thanks to Bobby Bradford, we can thank God for “futuring.” Happy seventy-fifth birthday Maestro Bradford! Many more happy birthdays to you! from http://www.allaboutjazz.com