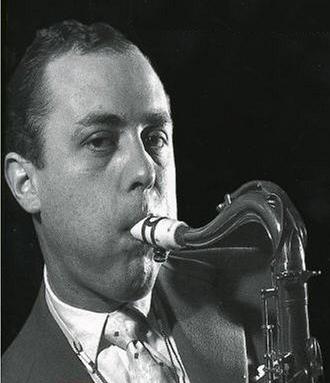 Bobby Jaspar (1926-1963) was a Belgian jazz musician, playing tenor saxophone and flute. Jaspar was born on 20th February 1926 in Liège, Belgium. He learnt to play piano and clarinet when young, later taking up the tenor sax and flute. he started his career with a band called the Bop Shots, gigging around U.S. bases in Germany, but moved to Paris in 1950, playing and recording with the best musicians of the era (including Chet Baker and Jimmy Raney. After marrying singer Blossom Dearie, he moved to New York with her. He toured with [J.J. Johnson from 1956 to 1957 (in which year he also worked with Miles Davis. After touring Europe with Donald Byrd in 1958, he returned to the U.S., where he worked with such msuicians as Bill Evans and [Chris Connor. In 1962 he again toured Europe, this time with the Belgian guitarist René Thomas. Back in New York, on 28th February 1963, at the age of thirty-seven, he died from a heart attack following surgery. User-contributed text is available under the Creative Commons By-SA License and may also be available under the GNU FDL.