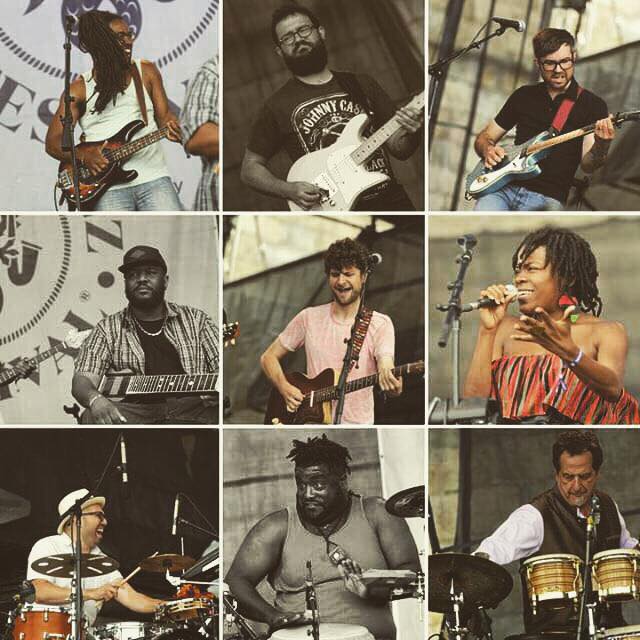 Bokante, an international music group just formed, believes that connection is the foundation on which all things can be built. The connections between the members span nearly two decades. Outwardly, however, the band was formed out of a desire to connect with the society and address the most pressing problems. The unusual, but powerful instrumentation blends the sounds of desert and delta to send a message of social awareness about the increasing tide of exclusions and indifference. In Creole, Malika Tirolien’s native language, the word “bokante” means “exchange” and is the name of Malika Tirolien who grew up on Guadeloupe in the Caribbean. She now lives in Montreal with 8 other musicians from four continents. Each one is an accomplished musician and has a deep understanding of music beyond their origin. The two-time Grammy-winning guitarists Michael League and Chris McQueen (all from Snarky Puppy), percussion legend Jamey haddad (Paul Simon and Sting), Roosevelt Collier (Lee Boys and Karl Denson), and the unplaceable percussionists Andre Ferrari and Keita Okawa (Banda Magda and Yo-Yo Ma), come together to form a rich ensemble that is full of groove, melody and soul. The formation process was an experiment by Michael League, founder of Snarky Puppy and creator of GroundUP Music. He traded in his bass for a baritone in this group. League composed the music and some of its melodies, which he then demoed on tour with other bands and sent to Tirolien along with lyrical ideas. Tirolien wrote the lyrics and melody, and then demoed and ping-ponged the new content back at Michael. Many of the musicians hadn’t met before the recording began. The band was unusually cohesive by the end of the week-long recording session at Dreamland Studios in upstate New York. League stated that unity was key to the formation of the group. League stated that even though the group is multilingual, multicultural, and multigenerational, they feel like one as musicians and people. We all feel connected as musicians and people, even though the ensemble is multi-lingual, multicultural, and multi-generational. Tirolien sings in Creole and French and draws nuanced images of the challenges we face today – racism, refugee crisis and a dying planet – and offers words of thanksgiving for the things that unify us as well as hope for our future. Bokante, through it all, is a vivid image of what it wants to see in the world: unity, connection, and love-through exchange. from www.musicworksinternational.com