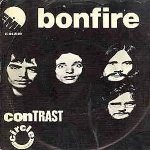 Record company EMI was determined to find a replacement for Focus when it suddenly ceased operations. They thought they had. Bonfire was the one to get them a record deal and all of their Focus equipment. Although Bonfire did not make it, their one album is still a fine example of Dutch progressive rock from the seventies. It’s right next to Solution, Focus, and Finch. Bonfire’s music is at times very similar to Greenslade, particularly when the Fender Rhodes piano sounds its best. Also, “Chinese In Europe”, has many Camel elements that were part of the Mirage-era. from http://members.home.nl/gerser/dutchprog/bfire-disco.htm