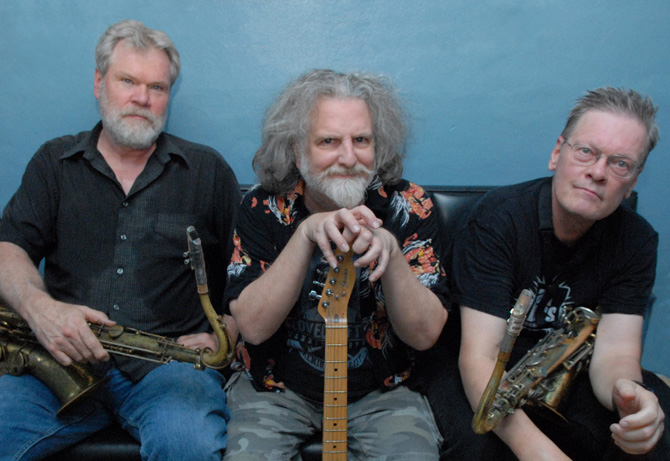 Borbetomagus is a group that allows for free improvisation/noise. Critics have referred to them as the pioneers of aggressive, improvised noise music. Borbetomagus was formed in 1979 by Don Dietrich and Jim Sauter, saxophone players. They briefly had Adam Nodelman as bass guitarist, but they have sometimes collaborated with other musicians. Their loud, aggressive music is described as “a massive, overwhelming, take-no prisoners mass of sound.” One extended technique they use is “bells together”, where Sauter, Dietrich hold the bells (openings), of their saxophones against each other while they play. Borbetomagus has been dominated by the three mentioned above, but they have also collaborated with Voice Crack, Tristan Honsinger (Dutch cellist), Peter Kowald (German double-bassist), and other circuit bending artists. They recorded a joint album with Hijokaidan at the Festival de Musique Actuelle, Victoriaville, Canada in 2006. Their long-out-of-print cassette, Live in Allentown, was also released on CD in 2007. It contains nearly twice the material of the original. Sauter and Dietrich also recorded a duo CD and a collaboration CD with Sonic Youth guitarist Thurston. Borbetomagus is a reference to the Celtic origins of Worms, Germany. Their limited Live At Inroads cassette was re-released on CD by Japanese label P.S.F. They are widely respected in the Japanese noise music scene. Records and a CD by Osaka-based noise label Alchemy Records. They are a major influence on American rock, free jazz and noise musicians like Sonic Youth, Pelt and Thomas Ankersmit. Miller worked with Pelt. He now lives in New Orleans and collaborates with Rob Cambre on E-Bowed guitars. From Wikipedia