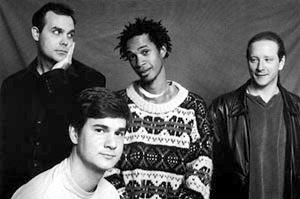 The Boud Deun instrumental quartet was formed in 1994 in Warrenton (Va.). It is well-known for its virtuoso performances and energetic live performances. This group is popular with all ages and interests. Boud Deun’s music is fast-paced and reminiscent of the Mahavishnu Orchestra and the lyricism and dark angularity that King Crimson had. But, one can also hear bluegrass, punk and classical elements. Shawn Persinger, guitarist and composer, graduated from the Musicians Institute in Los Angeles in 1992. Leo Kottke and AC/DC’s Angus Young were his influences. John McLaughlin was also an influence. Matt Eiland, bassist and composer, started playing saxophone when he was a kid. He switched to bass guitar at the age of 15. In 1991-1992, he was a member of Weak Old Rice, a DC-area fusion metal band. He is a major in jazz studies at Shenandoah University Music Conservatory. Greg Hiser, a violinist, studied with Andrej Grabier (Concert Master of the Wichita Symphony), from 1985 to 1987. He has performed all over Washington, DC, with the bluegrass bands New Mountain, Virginia, and Blue Dots. Rocky Cancelose, drummer, studied at the Drummers Collective in New York City. Fiction was released by the group.