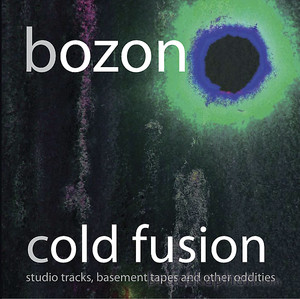 This CD features Bozon, its last incarnation. Bozon was a jazz-rock band that began in late seventies. It started in a rehearsal room (“the space”) near San Francisco’s nexus at Market and Van Ness streets. Many long nights and long days were spent on original compositions. They often had an anarchic sense and humor. They also used “odd time signatures” and didn’t care for the monotony of four-four disco. A wide range of backgrounds contributed to the diversity of the compositions. This sometimes led to a confusing mix for both players and listeners. The results can be amazing and even sublime when things go well. Bozon had a few odd parties and gigs but it was difficult to replicate their sound outside of that space. The handwriting became easy to read as disco was replaced by punk. In late 1980/early 1982, the group was disbanded. This CD’s bulk was recorded in 1980 on two Teac 40-4 tape decks. The sound quality was poor. This material was transferred to the digital realm almost three decades later (not too quickly, as the tape was deteriorating) and cleaned up in a tedious process. Two of the pieces were originally recorded at 16 and 24 track analogue studios. They were then transferred to Pro Tools for editing. It wasn’t the goal to “re-do the music”, but to improve its sonic quality, and to present some work that was lost by an unknown band. from http://www.brucekaphan.com