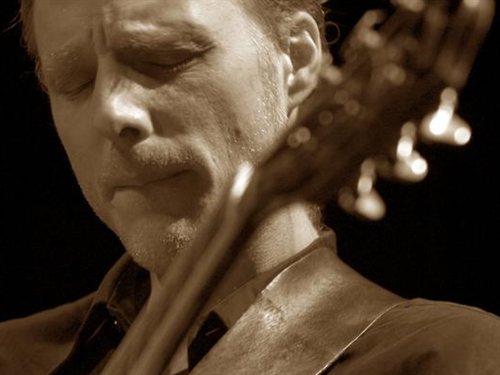 Brad Shepik, in addition to his own bands, has recorded and performed with Joey Baron and Carla Bley as well as Dave Douglas and Simon Shaheen (oud/violin virtuoso), Yuri Yunakov and the Bulgarian Wedding Band, among others. Brad Shepik was born in Walla Walla Washington, and grew up in Seattle. He began playing guitar when he was 10, after which he bought his father’s guitar. He played guitar and saxophone with school bands, and studied guitar under Dave Petersen and Al Galante. He earned a B.F.A from Cornish College of the Arts and a Masters in Jazz Performance/Composition from New York University. Shepik arrived in New York in 1990 and has been involved in many bands, including Pachora w/Chris Speed and Skuli Sverrisson. He also performed with Charlie Haden’s Liberation Orchestra, Carla Bley and Skuli Sverrisson. He also toured and recorded for Paul Motian’s Electric Bebop Band over five years. The guitarist also recorded and performed in various groups such as Yuri Yunakov’s Bulgarian Wedding Band or Simon Shaheen’s Quantara. The Loan and The Well were Shepik’s first records as a leader. They were highly praised for their blend of jazz and world music styles. Shepik was also a co-leader of two world music-tinged trios: Triduga, with accordionist Yuri Lemeshev, and Tony Scherr on the bass balalaika. Lingua Franca was led by Peter Epstein and Matt Kilmer. Shepik, along with Scott Colley and drummer Tom Rainey, began to reexamine the traditional guitar/bass/drums arrangement. Drip and Short Trip were both critically acclaimed recordings that were featured on NPR. Shepik is currently a member of a trio that includes Gary Versace (organ, Rainey, and drums). They have performed at festivals in Europe and North America. Their most recent album, “Places You Go”, received a 4-star review in Downbeat. It also appeared on many “Best CD’s 2007” lists. Shepik continues touring with Joey Baron’s Killer Joey and udist/violinist Simon Shaheen. He also plays with George Schuller’s Circle Wide, Matt Darriau’s Paradox Trio. “Human Activity Suite”, a 10-movement piece on climate change for jazz quintet, is his latest recording. Shepik plays guitars, saz, and tambura. It also features Ralph Alessi (trumpet), Gary Versace, Drew Gress (bass), and Tom Rainey on drums. Songlines Recordings released “Human Activity Suite” in February 2009. Text contributed by users is available under Creative Commons By–SA License. It may also be available under GNU FDL.