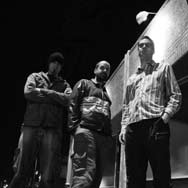 Brainkiller is an argentinean jazz-prog trio that features Brian Allen, Jacob Koller and Hernan Hecht as the rhythmic instruments. They started out as a duo and then became a trio to record their first album in 2007. RareNoiseRecords eventually released it. Their music is influenced by jazz, progressive rock and zappa-esque songwriting. They also offer wonderful live performances, including the one at Genoa Jazz Festival 2010. It’s unlike anything you have ever heard. from http://www.rarenoiserecords.com