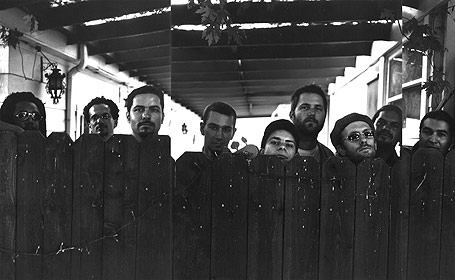 Break. Break. Arkestra. Sun Ra, a jazzer and funkaholic, presents a new concept for the traditional orchestra. The Breakestra, a Los Angeles-based 10 piece ensemble, can be flipped upside down. The Breakestra was born as the result of a vision by bassist/guitarist/upright cellist/producer Miles Tackett. Tackett discovered hip-hop music after listening to Ultramagnetic MC’s Critical Beatdown in late 1980s. This was the era when tons of funky samples and dusty drum beats first came to light thanks to enterprising producers like Pete Rock, Large Professor, and Paul C. In 1999, Tackett explained to URB Magazine that hip-hop was what attracted him. “Now, I see that hip hop music is the only one keeping funk alive,” Tackett stated to URB Magazine in 1999. In 1996, Tackett took on a more active role as cultural preservationist. Tackett was part of the original crew who produced LA’s weekly coffeehouse series The Breaks. He spun records by The Meters and Kool