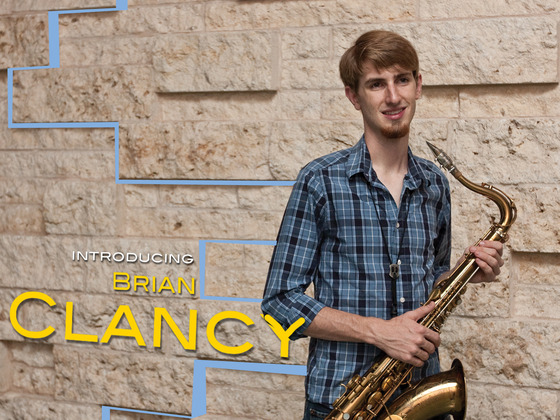 Brian Clancy is an artist who plays from his heart. He can be heard playing clarinet, flute or saxophone. Brian, a Southlake native, began playing the saxophone when he was 11 years old, under the guidance of Gio Washington Wright, a University of North Texas graduate. Gio was a North Texas alumnus. Brian also studied with Josh Fox and David Pierce. One of Brian’s most important musical experiences was being a part of the Carroll High School jazz bands. These three teachers inspired Brian’s drive to continue learning and push himself beyond his limits. Brian enrolled at the University of North Texas in Jazz Studies to follow in the footsteps of his teachers. Three years he spent in the school’s best jazz ensemble, the Grammy nominated One O’clock Lab Band. This was a dream that he had been chasing since he saw the band perform when he was 14. Brian was able to perform with notable musicians like James Carter, Kurt Rosenwinkel and Lyle Mayes, as well as share the stage with the Houston Symphony Orchestra. Brian, who just graduated from Denton in December 2011, has been busy recording his debut album, ‘Introducing Brian Clancy.’ His new album, Introducing Brian Clancy, is his second. It features an eclectic group of musicians who are all very intuitive and have made life a lot easier. Brian is a professional musician who plays in a variety of bands around Dallas/Fort Worth, as well as a few unique cover bands and his own quartet. He also teaches privately. He will spend the summer in Anaheim playing in the Disneyland All American College Band. He plans to leave Anaheim, CA in the fall to pursue a career in jazz and the recording industry as a woodwind player. bio by http://armoredrecords.com/