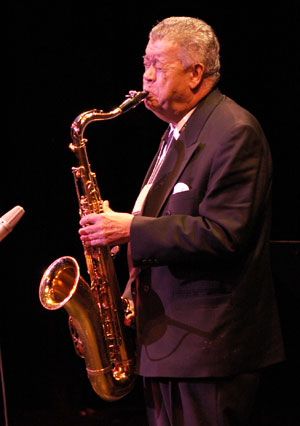 Saxophonist and clarinetist Roger “Buck” Hill at age fifteen in the early 1940s was a regular performer on the legendary U Street corridor of jazz clubs and show rooms. After high school graduation and military service in the 173rd Army Ground Force Band, he returned to Washington, married, began a family, and took a job with the U.S. Postal Service. With the exception of the period of 1955–60, he remained with the Postal Service until his retirement in 1998. Mr. Hill came tobe known as “The Jazz Postman,” and was so memorialized in the famous William Claxton image of the same name. By the early 1950s he had established himself as the premier tenor saxophonist in the Baltimore-Washington region. In 1956 Mr. Hill was in residence at Washington’s Showboat Lounge as a member of guitarist Charlie Byrd’s group. His recordings with Byrd include Jazz at the Showboat, Vol. I (1958) and Vol. II (1959), and he is featured on Allen Houser’s No Samba (1973). In 1978 Mr. Hill made a series of recording for Steeplechase Records, including This Buck Hill, Scope, Impressions, and Easy to Love. He was featured on a number of recordings led by Shirley Horn—Close Enough for Love (1988), You Won’t Forget Me (1990), The Main Ingredient (1996), and I Remember Miles (1998). His recordings as a leader include Buck Hill Plays Europe (1982), Capital Hill (1989), The Buck Stops Here (1990), and I’m Beginning to See the Light (1991). Mr. Hill made his acclaimed European debut in 1981 at the North Sea Jazz Festival. In 1982, he was celebrated in his hometown with the mayoral declaration of “Buck Hill Day” (which was also declared in Ottawa, Ontario, Canada during the Sixth Annual Ottawa Jazz Fest) and a tribute, organized by the Charlin Jazz Society. He has received two NEA grants, one for composition and one for performance, and he represented Washington, D.C. as part of the 1986 Royal Pacific Exchange Jazz Showcase. He performed in the Eisenhower Theater on December 11, 2004 as part of a special tribute to jazz legend Shirley Horn. from www.kennedy-center.org