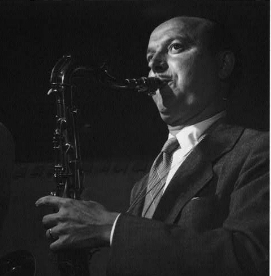 Lawrence “Bud” Freeman, April 13, 1906 – March 15 1991, was an American jazz musician and bandleader. He is best known for his playing of the tenor, but also capable at the clarinet. His tenor style was full and smooth with a strong swing. He was one the most important and influential jazz tenor-saxophonists in the Big Band era. His most notable recordings included “The Eel”, Tillie’s Downtown Now”, Crazeology, “The Buzzard”, and the song “After Awhile”, which he co-wrote with Benny Goodman. Freeman was one of the founding members of the Austin High School Gang, which began in 1922. He played the C-melody Saxophone with his bandmates Jimmy McPartland (and Frank Teschemacher) before moving to the tenor saxophone two year later. They were influenced by Louis Armstrong and the New Orleans Rhythm Kings, and would develop their own style. This was the Chicago Style of Jazz. He moved to New York in 1927 and worked as a session musician, band member, and drummer with Red Nichols. His most memorable performance was his solo on Eddie Condon’s 1933 recording, The Eel. This became Freeman’s nickname for his long, snake-like improvisations. Freeman was a member of Tommy Dorsey’s Orchestra (1936-1938), and briefly with Benny Goodman’s 1938 band before forming his own band the Summa Cum Laude Orchestra (1939-1940). Freeman was a member of the US Army in World War II and he led a US Army band on the Aleutian Islands. Freeman returned home to New York after the war and led his own bands. He also kept close ties to Eddie Condon’s freewheeling bands. Freeman also worked in’mainstream” groups with Vic Dickenson, Ruby Braff and Jo Jones. Along with Leon Pober, he wrote the ballad “Zen Is When”, which was recorded by Jazz Impressions of Japan (1964). Between 1969 and 1970, he was part of the World’s Greatest Jazz Band. He also played occasionally after that. He would eventually move to England in 1974 and make numerous recordings and performances there as well as in Europe. He returned to Chicago in 1980 and continued his work until his eighties. He also published two memoirs, You Don’t look like a Musician (1974), and If You Know of A Better Life, Please Let Me (1976), as well as an autobiography, Crazeology (1989), which he co-authored with Robert Wolf. Bud Freeman was inducted into both the Big Band and Jazz Hall of Fames in 1992. Wikipedia