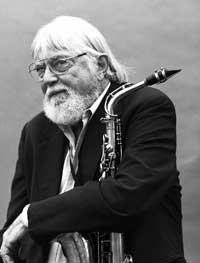 Bud Shank is an integral part of the international jazz scene since 1960. His dynamic and renowned performances as a saxophonist and composer have been a highlight of many concerts, festivals, nightclubs, and recording sessions. In the late 1940s, Shank was first prominent in the big bands of Stan Kenton and Charlie Barnet. The saxophonist started a long career with Howard Rumsey’s Lighthouse All Stars in the 1950s. He also worked with his own quartet. Shank was a charter member of “West Coast” jazz. His cool, but always strong swinging sound made him one of few saxophonists with an easily recognizable and exciting sound. The musician produced more than 50 albums during this time. Shank continued to work in the studio over the next 20 years, supplementing his festival, university, club and concert appearances. He was a first-call alto sax and flute musician and won the Most Valuable Player award of the National Academy of Recording Arts and Sciences. Shank formed the LA Four in the 1970s and 1980s with Ray Brown, Jeff Hamilton and Laurindo almeida. They recorded extensively and toured throughout the decade. Shank was instrumental in popularizing Latin-flavored and chamber music. He also performed as a musician with many orchestras, including the Gerald Wilson Big Band and Stan Kenton’s Neophonic Orchestra. Shank was a tireless explorer and creator of “The Lost Cathedral”, a multi-media jazz performance. He also expanded the Bud Shank Jazz Workshop in Albuquerque and Jazz Southwest Festival, as well as touring with his quartet. The bands are known for their exemplary writing and tight, fiery playing. They also have a joyful sense of collaboration. Bud Shank has a busy schedule that includes festivals, teaching, touring and performing at major clubs. He also enjoys composing and arranging. As a clinician, he is often in demand. He can be found as a leader of his own quartet or sextet as well as as a featured soloist with an orchestra, big band or any other star group. Bud Shank is a jazz musician who has been playing professionally for over 60 years.