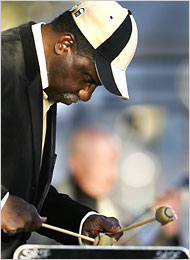 Charles “Buddy” Montgomery was an American jazz pianist and vibraphonist. He was born January 30, 1930 in Indianapolis, Indiana. He died May 14, 2009. He was Wes’ youngest brother and Monk Montgomery’s youngest child. In the late 50’s, he and his brother Monk formed the “Mastersounds” and made ten recordings. Monk and Buddy were joined by their brother Wes when the “Mastersounds,” disbanded. They also recorded a number of “Montgomery Brothers”, which were arranged Buddy. They toured together in 1968. Wes died during that tour. Buddy continued to arrange, perform and produce music, as well as teach and record. He also produced nine albums. Buddy began playing professionally in 1948. He played with Big Joe Turner in 1949 and Slide Hampton shortly thereafter. After serving a time in the Army where he had his own band, Buddy joined the Mastersounds in 1957 as a vibraphonist along with his brother Monk and pianist Richie Crabtree. From 1955 to 1957, he was the leader of the Montgomery-Johnson Quintet together with Ray Johnson. His first sessions as a leader were in the late 1950s. In 1960, he briefly played with Miles Davis. He moved to Milwaukee in 1969 and began teaching jazz music there. He moved to Oakland in the 1980s, where he released more solo music and performed with the Riverside Reunion Band. from http://en.wikipedia.org