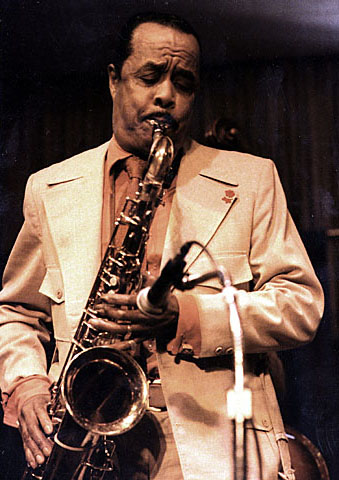 Buddy Tate, one of the most distinctive tenors from the swing era was a replacement for Herschel Evans with Count Basie’s Orchestra. He had previously played with Terrence Holder (1930-1933), Count Basie’s original Kansas City band (1934), Andy Kirk (1934-1935) and Nat Towles (1935-1939). Tate was able to compete with major tenors like Lester Young and Lucky Thompson during the 1939-1948 period. After working for Lucky Millinder, Hot Lips Page and Jimmy Rushing (1950-1952), Tate started his own crowd-pleasing band at Harlem’s Celebrity Club, where he remained there for 21 years. Tate recorded in many settings, including with Buck Clayton and Milt Buckner. He was also a star of John Hammond’s 1967 Spirituals to Swing concert. After the Celebrity Club ended, Tate continued to be busy recording, leading a band with Paul Quinichette, performing at jazz parties, as well as playing and recording in Canada in 1975 with Jay McShann, Jim Galloway, and was also a favourite sideman for Benny Goodman in the late 1970s. Despite the fact that age was starting to take its toll, Buddy Tate recorded and played with the Statesmen of Jazz and Lionel Hampton in the mid-’90s. Tate was born in New York and lived there until January 2001 when he moved to Phoenix to be with his daughter. Buddy Tate, who died on February 10, 2010, was a few more weeks after he had moved to Phoenix, Arizona with his daughter.