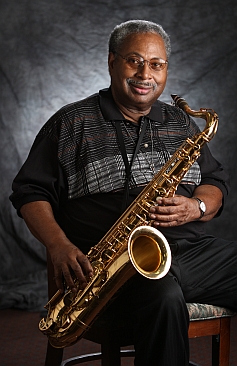 Buddy Terry, a child prodigy, started playing clarinet at 12 years old. He then took up the tenor and sax in 1956. He was a teenager and played in many of Newark’s top jazz clubs. Later as a professional, he was able to play in the bands of some the most prominent names in modern music: Ray Charles, Ray Charles and Lionel Hampton. Terry was also an original member on TV of “Saturday Night Live”, the Duke Ellington alumni band. This was the pit band for the Broadway show “Sophisticated Lady”. He has recorded both with his own bands on the Prestige as Mainstream labels. Terry is a Newark resident for over 40 years. from http://newarkjazzelders.com