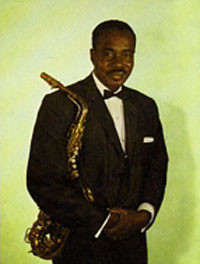 Buster Smith was a talented alto saxophonist, an arranger/composer and probably wrote “One O’Clock Jump”, although Count Basie got the credit. It is difficult to evaluate his contributions to jazz because he was not recorded throughout his career. Charlie Parker frequently acknowledged Smith’s influence over his tone. There are a few early recordings of Smith that do not show Bird’s style, but they do show similarities. Parker was a member of Smith’s band in 1937. Buster Smith was a Kansas City fixture for most of his most important years. From 1925-1933, he was part of Walter Page’s Blue Devils (the band only recorded two recordings), and Bennie Moten’s orchestra in its final period (1933-1935). He also co-led Barons of Rhythm along with Count Basie. Basie was not able to travel with him to New York. Smith went East to contribute arrangements to many orchestras, including those of Gene Krupa, Count Basie and Benny Carter. He also had brief stints with Don Redman and Hot Lips Page. Buster Smith lived in Kansas City, Texas and then returned to Texas. In 1959, he recorded an obscure and long out-of print Atlantic album.