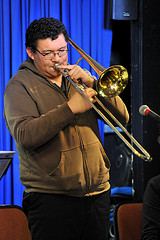 Callum Au, a British composer and arranger, orchestrator and trombonist, is his name. He is a prolific composer of music in many genres. His passion lies with big band and large ensemble jazz music. He is well-known for his versatility and stylistic awareness. He has also worked with some of world’s most prominent artists. Callum was born in London to a Scottish mother, and a Chinese dad. He spent most of his childhood in Blackpool, before moving to London where he currently lives and works. Callum is a well-known arranger and orchestrator in the country. Callum has had the honor of writing music for international artists such as Quincy Jones and Jamie Cullum. He was asked to arrange the big band numbers for the Hollywood movie adaptation of Andrew Lloyd Webber’s ‘Cats’ in 2019. He has transcribed several hundred vocal charts from the ’50s, ’60s that were inspired by the classic arrangements of Nelson Riddle and Billy May. Many of the best jazz singers in the world have sung these charts, including Matthew Ford and Clare Teal. Callum is a busy writer and has been a member since 2012 of Ronnie Scott’s Jazz Orchestra, which is one of the UK’s most prestigious large jazz ensembles. He also performs regularly. A large portion of the current band’s repertoire is also his compositions or arrangements. Callum has performed with top jazz musicians such as Curtis Stigers and Seth MacFarlane. He also performed at venues like the Cheltenham Festival and the Royal Albert Hall. Callum has performed with many of the UK’s top jazz bands and ensembles for numerous West End musicals and as a session player on many recordings for TV and film. Callum is a director and player in various ensembles, which are his primary creative outlets when he isn’t busy writing and arranging music for other artists. from https://callumaumusic.com