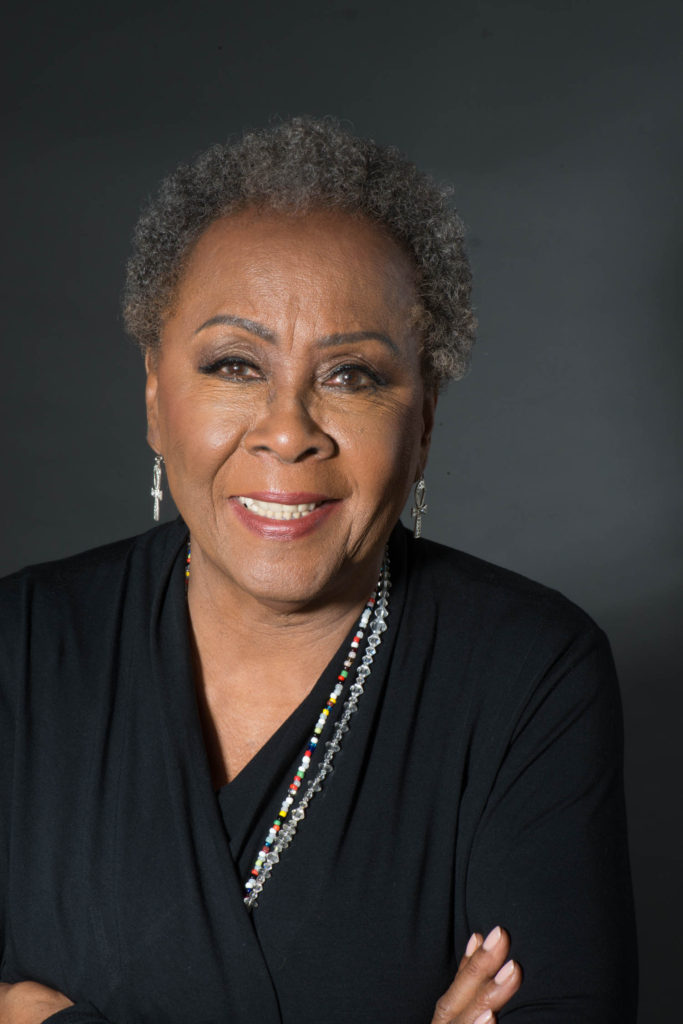 Camille Yarbrough, a cultural activist, author and performance artist, is an award-winning performer. Nana Camille is a legendary performer, author, and cultural activist whose career spans more than sixty years and several continents. She has won numerous awards and accolades and been a part of a few generations. Today, she continues to inspire viewers through her 16-year-old television series (Ancestor House), her popular music CD (also called Ancestor House), as well as performances and lectures that focus on poetry, music and Black art, spirituality and culture. The Tribute Collection Commercial featuring Forevermark Diamonds is introduced by Camille Yarbrough’s hit song “Take Yo Praise”. SoundCloud has a House Music remix to Camille Yarbrough’s song “Take Yo Praise”. The current issue of Black Renaissance Noire contains a page excerpt from Nana Camille Yarbrough’s autobiography, “Strip Down Personal”, pages 160-167. (Volume 17, Issue 2 Fall 2017) Camille Yarbrough will be interviewed by Ed Stokes in Conversations: The Black Radical Tradition. Camille Yarbrough, most recently, was a featured performer at Onaje Allan Gumb’s “Truth To Power” Concert at Aaron Davis Hall. After performing at The Soulful Chicago Book Fair, she returned to her hometown. Nana Camille spoke to young Harlem students at Carolyn Butts Africa Voice’s Get your Read On Assembly at the Urban Assembly Academy for Future Leaders. Nana Camille Yarbrough received the honor at The Langston Hughes Cultural Centre in Queens, New York and Essex County College, Newark, New Jersey’s 16th Annual Juneteenth Festival. She is often called upon to share her wisdom, life/work, at Kwanzaa celebrations, Haitian tributes in Brooklyn, concerts in New York City for Maulana Karenga or on the Michael Eric Dyson Radio show. Nana Camille has a life-long vision that is unaffected by the medium. She is a tireless champion of the beauty and greatness that African people are everywhere in the world. Her mission is to lift their glory and vibrate the thread of humanity that binds us all. Camille Yarbrough, who was born Naa Kuokor Agyman 1 in New York, was given the honorary title “Nana” by Abladei, Inc. Yarbrough was nurtured and became a creative force when she performed as a member of The Katherine Dunham Company of Singers, Dancers, and Musicians. Nana Camille learned how to perform and produce gifts, and she also studied the Diaspora’s African people. The Chicago native is currently living in New York. Nana Camille Yarbrough was twelve years a City College of New York faculty member where she taught African dance as well as Harlem community classes. She was an actress in theater and starred in Lorraine Hansberry’s To Be Young, Gifted, and Black. As a company member, she also did the national tour. Later, she recorded the cast album and wrote an article of half-page about the show in The New York Times Drama Section. Also, she did a tour of Ted Mann’s Circle in the Square Theater Production, God’s Trombones by James Weldon Johnson. She also performed in Adrian Kennedy’s Cities in Bezique at New York’s Public Theater, and sang, danced, and acted in the Broadway Musical Kwamina. Her credits for television and film include Search For Tomorrow, Television Special, Where the Heart Is, Soul, CBS Special, Caught in the Mid, and Gil Noble’s Like It Is. Her one-woman show Tales and Tunes of a African American Griot also saw her on tour. Nana Camille is a singer who was featured on the international hit Praise You by Fatboy Slim. The Iron Pot Cooker, her first solo musical recording (1975), is where the song Praise You was recorded. Camille Yarbrough published her first book in 1979, Cornrows. This award-winning and groundbreaking family book (Putnam Publishers), was called “a jewel” by Essence magazine. Later, three books were published: The Shimmershine Queens (Random House), The Little Tree Growing In the Shade (Putnam Publishers), and Tamika and The Wisdom Rings (Just Us Books). Black Collegian Magazine published a series called “Black Dance in America” 1980-1981. Ivan Van Sertima published a photo essay entitled Female Style and Beauty in Ancient Africa. She answered a question about the relevance of her message today by saying: “In African Jelimuso/Griot tradition, I am charged not only to share stories but also to preserve the beauty and meaning of culture. That work transcends time and space” from www.camilleyarbrough.com