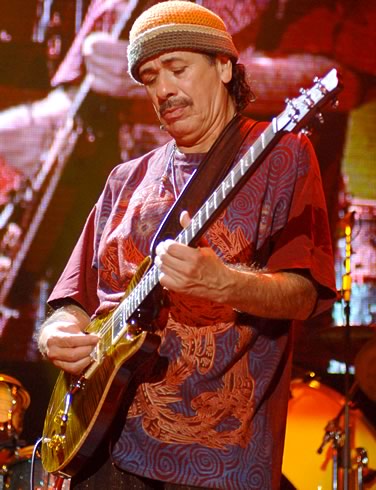 Carlos Augusto Santana Alves Born 20 July 1947, Autlan de Novarra, Jalisco, Mexico. Santana, a veteran guitarist, is known for his Tijuana-influenced playing style. He was born in Mexico but has lived in the USA since childhood. Since 1966, he is the leader of Santana. They were originally the ‘Santana Blues Band,’ and debuted as Santana at Bill Graham’s Fillmore West theatre in San Francisco, on June 16, 1968. After the dissolution of the original group, Carlos recorded his performance on film at Woodstock Festival in Aug 1969. He then worked with Buddy Miles to record the music. Carlos formed a duo along with John McLaughlin and became a disciple of Sri Chinmoy, who gave them the titles of ‘Devadip (the eye, lamp, the light God), and ‘Mahavishnu respectively. Together, they recorded “Love Devotion Surrender”. Then, ‘Devadip’ Carlos Santana worked with Turiya Alice Coltrane (widow of John Coltrane). In 1982, he ended his relationship to Chinmoy followers. Santana was a regular performer with many renowned musicians from 1974 to 1999, and released numerous albums throughout the years. He released Santana-Supernatural in June 1999, which was his biggest hit and won him eight Grammy Awards. from http://www.discogs.com