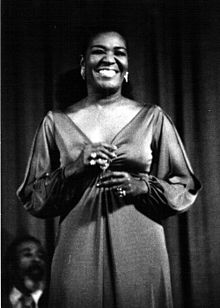 Carrie Louise Smith, born August 25, 1925 and died May 20, 2012. She was an American blues/jazz singer. Although she was not well-known in the United States, she had a large following in Europe. Smith was born in Fort Gaines (Georgia). Smith was part of a church choir which performed at the 1957 Newport Jazz Festival. In the 1970s, she was first noticed singing with Big Tiny Little. She became famous in 1974 as Bessie Smith, a member of a church choir that performed at the 1957 Newport Jazz Festival. Smith then began a solo career performing with the New York Jazz Repertory Orchestra and Yank Lawson (1987). From 1989 to 1991, she starred in Broadway’s musical Black and Blue. In addition to numerous solo albums, Smith has a successful solo career. Ben Arrigo produced the album for GPRT Records and featured Gladys Shelley’s compositions. From Wikipedia