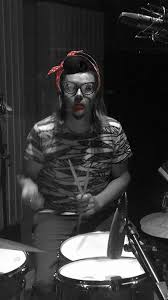 Is this really the case? Some say it’s just 90’s post-bop jazz with a hint of expressionism. Others say it’s Tomi Kamarainen. This is not the real deal. The unique personality of the Finnish drummer is what is really important in this case. He presents his quartet with his own view of music, combining lightness with grace of modern jazz timbre and experiencing Copenhagen through vast and varied pictures. Tomi Kamarainen (b. 1984 Leppavirta is a Finnish jazz drummer. Since 2004, he has been a musician, performing with a variety of bands and productions all over Finland. Kamarainen is currently completing his Master’s at the Rythmic Musik Conservatory in Copenhagen, and is preparing Case Kamarainen’s debut album. In 2013, he released his own music with the Groovin’ High Quartet. His highlights in his career include performing with the Groovin’ high quartet at Pori Jazz festival (2014), and Leonard Bernstein’s Trouble In Tahiti opera in Finlandia Hall (2014). Kamarainen was a music pedagogue at Savonia University of Applied Sciences. Kamarainen has been taught many jazz drummers over the years, including Kresten Osgood and Peter Bruun. Kamarainen has been a teacher for nearly 10 years. He is currently employed at Kuopio Conservatory teaching drums, music theory, and band instruments. Kainuu Conservatory is teaching music students of the upper secondary school level. Kamarainen also leads workshops for the disabled and dementia patients in various EU-funded projects (TAKUULLA YHDESSA!,TAKUULLA! HYVINVOINTIVOIMALA2014-2017). These workshops aim to create well-being services that use cultural possibilities and promote health and well-being through art and culture. from http://jazzfinland.fi