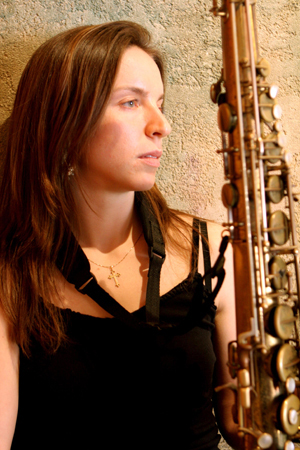 Catherine Sikora is a skilled saxophonist and improviser. Catherine Sikora, a saxophonist and composer, began her musical journey in West Cork (Ireland), where she was raised. She was self-taught to begin with and moved to New York City to study with and play with great musicians in 2000. Sikora can be found performing in many settings: from complex, composed music to folk songs to free improvisation. Enrique Haneine and Brian Chase, Hanearl Park, Stanley Zappa and Christopher Culpo are some of her regular collaborators. She also pursues solo performance. Sikora has toured across Canada, the United States and Europe. Sikora was featured soloist in Eric Mingus’ radical reimagining Tommy by the Who (Adelaide Festival 2015.) She was also artist in residence at Centre Culturel Irlandais, Paris, for the fall 2014, where she was working on a project that was inspired by stories about her female ancestors. Relative Pitch Records released Catherine’s debut solo album, ‘Jersey’ in July 2016. It received high praise from jazz critics around the world. from www.improvisedmusic.ie