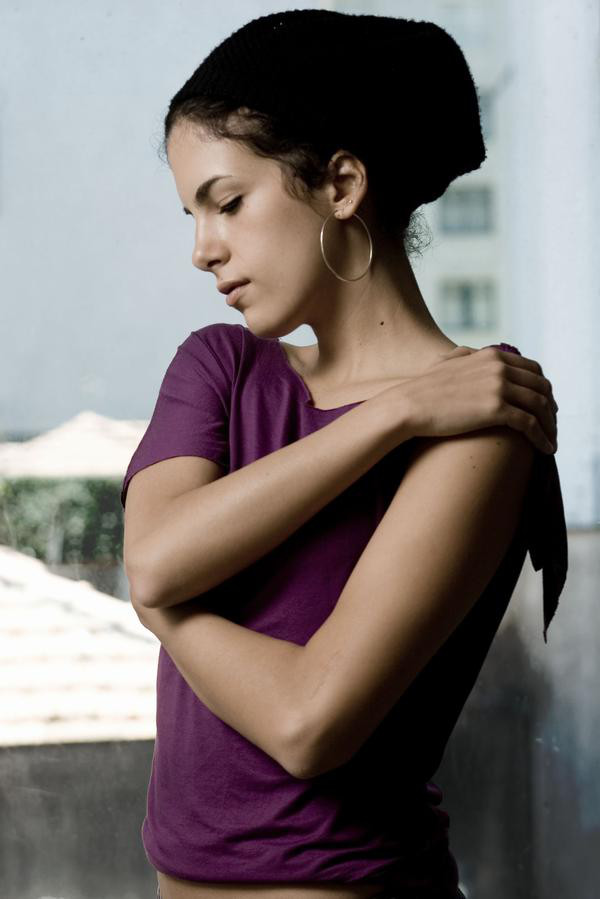 Ceu (Portuguese pronunciation of [seu]), also known as Maria do Ceu Whitaker Pocas is a Brazilian singer and songwriter. Her first American album, Six Degrees Records’ debut album, was released in April 2007. Born in Brazil, April 17, 1980 to a musical family. Her father was a musicologist, composer and arranger. Her father was the one who taught her to appreciate Brazil’s classical music composers, especially Ernesto Nazare, Heitor Villa-Lobos and Orlando Silva. She was fifteen years old when she decided she wanted to be a musician. By her teens, she had also studied music theory and the violao (nylon stringed Brazilian guitar). Her songs reflect her many influences which include samba and valsa as well as choro and soul. Ceu said, “I love Black culture from Jazz divas and Afrobeat.” All things come from Africa. Samba is my connection to the roots samba school. I’m a vinyl fan so I tried to add some of my favorite music to the CD. I also mixed it with contemporary sounds like rap and even ‘brega, which is the latest thing in Brazil. She cites Billie Holiday’s music, Ella Fitzgerald, Erykah Badu, and Jorge Ben as her influences. Ceu was performing with major artists in her teens and exploring the repertoire for the marchinhas (turn of-the-century carnival music). Shortly after, she moved to New York City. There she met Antonio Pinto, a fellow Brazilian musician, and became her flatmate during financial hardships. He was actually a distant relative. Their relationship was renewed when he teamed with Beto Villares (composer of the music for O Ano em Que Meus Pais Sairam de Ferias (2007)) to record her album. Pinto, the producer of Ceu’s song “Ave Cruz”, is also the composer of the music for two Oscar Nominated films: Central Station (film), (1999) and City of God (2002). Originally issued in 2005 on the Sao Paulo-based Urban Jungle, Ceu was picked up by Six Degrees/Starbucks/Hear Music in the US and UK, JVC in Japan and Harmonia Mundi in France and in the Netherlands. Ceu was nominated for the Latin Grammy as “Best New Artist” in 2006. Ceu is also enjoying international success, with the Latin Grammy nomination for “Best New Artist” in 2006. Six Degrees Records released her debut album in the U.S. as the first international artist to be featured on Starbucks’ Hear Music Debut Series. NPR’s Morning Edition, The Associated Press and Reuters praised her album, calling her “… a new face in Brazil’s music scene. Her album has been downloaded over 110,000 times, making her the most popular Brazilian artist. Ceu achieved unprecedented chart numbers as a Brazilian female artist: -1 on Billboard’s Heatseekers(New Artist) Chart; 57 on Billboard Hot 100; and 1 on Billboard’s World Music charts. Ceu’s debut album CeU received a Grammy nomination in 2008. Her critically acclaimed second album Vagarosa was ranked #2 on the US Billboard World Music Charts in 2009. Since then, the album was nominated to the Latin Grammy Award 2010 for Best Brazilian Contemporary Pop Album. Herbie Hancock invited Ceu to record “Tempo de Amor”, a version of the track, for The Imagine Project album. She contributed the song “It’s A Long Way” to Apollo Nove and N.A.S.A. in 2011. Red Hot Organization’s latest charity album Red Hot Rio 2. This album is a sequel to 1996’s Red Hot Rio. Ceu was nominated for her fourth Grammy for Best Contemporary Brazilian Pop Album in 2012. This nomination was for her critically acclaimed album Caravana Sereia Bloom. Ceu – Ao Vivo was her first DVD/CD. The concert was recorded in August 2014 in Sao Paulo. It contains 15 tracks, as well as the previously unreleased cover versions of “Piel Canela”, “Mais Uma Noite de Amor”, behind-the scenes footage and much more. Ceu – Ao Vivo also features live versions of Ceu’s most popular hits, “Lenda”, “Malemolencia”, “10 Contados”, “Cangote” and “Baile de Ilusao”. Wikipedia