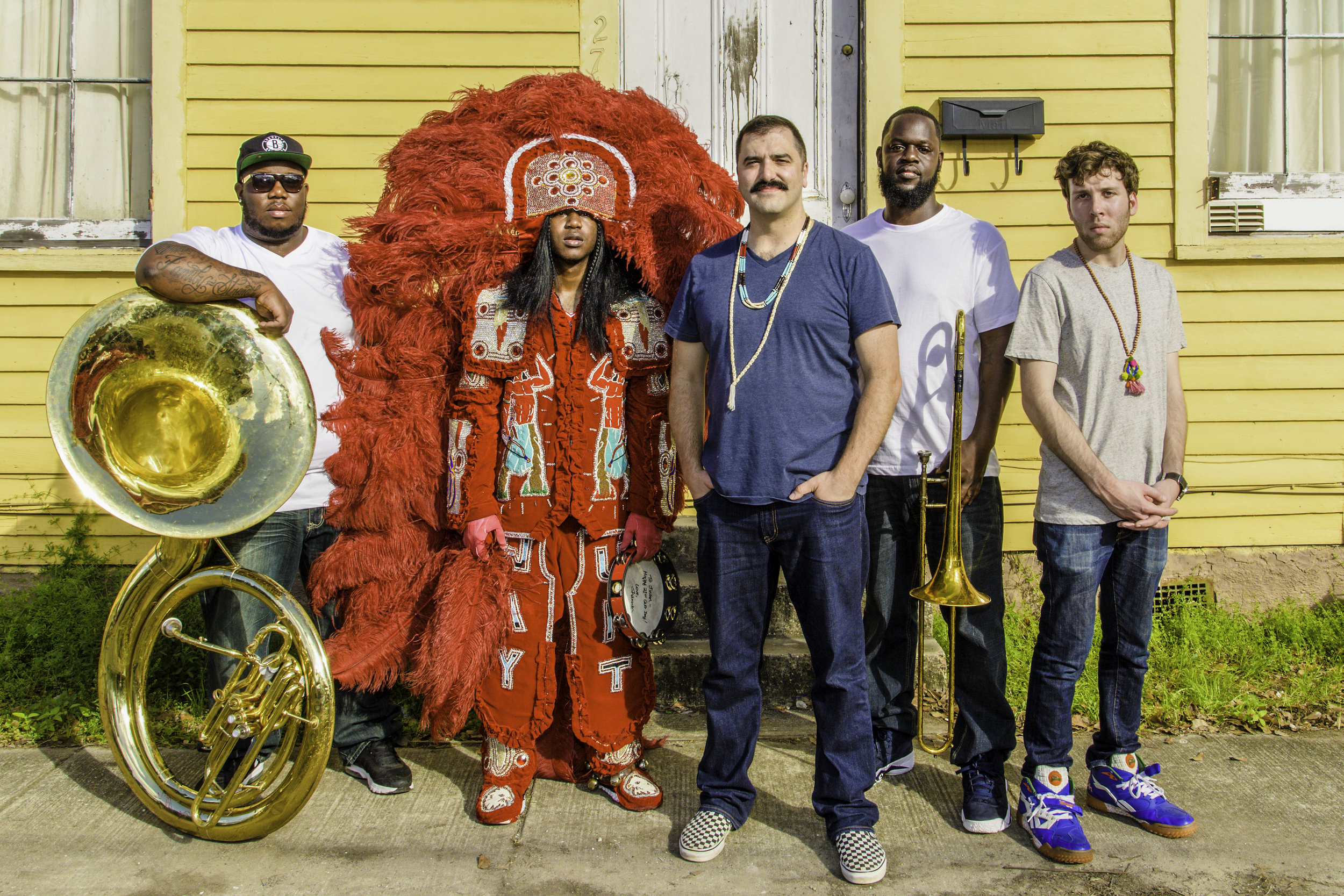 The funk-infused beats and sousaphone blasts that launch their album “Spyboy”, as well as the gritty warmth of J’Wan Boudreaux’s vocals, Cha Wa is a New Orleans brass band-meets Mardi Gras Indian outfit. They exude the vibrant energy of the city’s best street culture. Galactic’s Ben Ellman produced “Spyboy”, which features special guests Big Chief Monk Boudreaux, Nigel Hall (Lettuce and Nth Power), Danica Hart, and Nigel Hall (Lettuce and Nth Power). Cha Wa’s debut, “Funk N Feathers”, explored contemporary riffs of the traditional music Boudreaux grew to sing with his grandfather, Big Chief Monk Boudreaux. “Spyboy” takes the New Orleans sound and gives it a modern twist. The disc’s original material is largely original and makes use of the band’s new horn section to highlight musicians’ personal connections to street music in their hometown. Joe Gelini, the founder of the group, says that they wanted to “take the roots of what New Orleans brass band music is all about and Mardi Gras Indian musical music and voice it in their own way.” Mardi Gras Indian traditions date back to the late 1800s when African-American men marched in Native American attire through New Orleans streets on Mardi Gras Day. This tradition, which has a variety of songs from different tribes, has been preserved for more than a century. It is still as relevant today as it was 100 years ago. Mardi Gras Indians are a major influence on New Orleans music, including Dr. John, Dr. John and Trombone Shorty, as well as Dr. John and the Marsalis families, Dr. John and Trombone Shorty. Monk Boudreaux is the Big Chief of Golden Eagles tribe and his grandson J’Wan Boudreaux (who holds Spyboy position in the tribe) are leading the charge to help propel their culture forward. J’Wan joined this group while he was in high school. Gelini, a Berklee School of Music grad at the time, had been playing drums with Boudreaux’s grandfather for a while. He had learned traditional Mardi Gras Indian beats and rhythms from Norwood “Geechie” Johnson, the original Wild Magnolias bass drummer. J’Wan was chosen to be the band’s front man as they evolved. Boudreaux’s vocals, supported by Thaddeus Ramsey’s smooth-voiced Indian voice, the booming, funky sound of the band’s new four-part Horn section and Gelini’s mix between second line grooves, soulful Indian rhythms, all combine to create a new fire in Cha Wa’s ever-evolving sound. Boudreaux claims that “Spyboy”, although “cha wa” can be translated as “we’re comin’ for ya” by Indians, is actually “Cha Wa all around” because of a different reason. Cha Wa is a new generation of music lovers, with songwriting contributions from Joe Maize, Thaddeus “Peanut” Ramsey, Ari Teitel, Clifton “Spug” Smith, and J’Wan. Boudreaux says, “Everyone put his mind together to create this music. Everybody had input on at most one song. The band is now closer together. Everyone is now bonded. Everyone’s having fun. The song “Get On Out the Way”, with its loose, ’70s rhythm, tight horn parts, and deep, bouncing sousaphone, brings that celebratory vibe alive. It spikes a traditional Indian phrase, with a fast-moving brassband twist. Cha Wa’s music also has a deeper, more social message. Monk and Gelini wrote “Visible means of Support” about Monk’s experiences with the Jim Crow vagrancy law from the 1950s that was used primarily for African-American men. The J’Wan-penned and big-beat-centric “Chapters” features the singer tackling more current issues. In this case, he discusses the inner struggles that he experienced as a single parent. He uses the piano and vocals to tell “J’Wan’s Story”, a mellow and gentle story that explains how Mardi Gras Indian culture evolved. He explains, “We wear Indian suits to honor the Native American Indians,” and continues to sing the song. “All of our suits are handmade, including the patterns and beads. We sew the panels together, make the boots, and we make the boots. It’s dance music, so people will be attracted to it. Gelini says that even though people don’t know much about the history, it is instantly infectious. The drummer says, “J’wan is the next generation.” From www.chawaband.com: “He’s keeping that flame lit.”