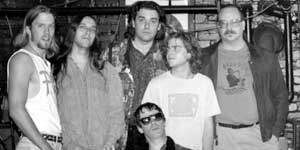 Chainsaw Jazz, a Washington, D.C., band was founded in 1989 by Paul Sears u0026 Mark Smoot. Sears is most well-known as the drummer for the Muffins between 1976 and 1981. He has collaborated with musicians such as Fred Frith and Peter Blegvad. Yochk’o Seffer and Bill Laswell. Mark Smoot, bassist, has performed with Clockhammer and Jaws of Life and Theresa Gunn. He also produced and released The Attic, a solo album. Smoot was also an independent record producer, and owned his own studio. Mark Gilbert (saxophone, clarinet) has been a session player and has toured with and/or recorded with several artists, including the Temptations and the Four Tops, Gladys Knight and Cab Calloway. Columbia University composition student Ed Maguire studied violin and electric mandolin. He toured Asia frequently with Jack Lee, Chico Freeman and others. Maguire, a former student of Jaco Pastorius is also an accomplished bassist. Christian Nagle (guitar), was the leader for the group Harvest and also performed with alternative rock band Clockhammer. Mark Stanley (guitar), who attended Berklee College of Music, Boston, played with Jaws of Life and Clutch. Allmusic