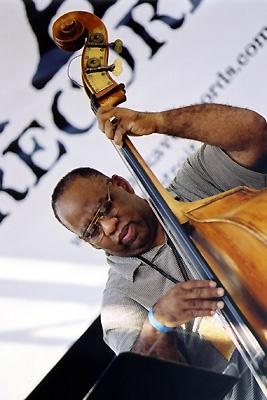 Charles Fambrough is best known for his time with Art Blakey’s Jazz Messengers. He led three highly successful all-star dates at CTI filled with his originals. Although he studied classical piano, he switched to bass at the age of 13. Fambrough started playing in local pit bands for musicals in 1968. After some freelancing in 1970 he joined Grover Washer, Jr.’s band and stayed with the jazz saxophonist until 1974. Fambrough played with Airto (1975-1977), McCoy Tyner (78-1980), then Art Blakey (1980-1982). He freelanced in many other situations after that. Wynton and Branford Maralis, Roy Hargrove and Kenny Kirkland were his sidemen on the CTI recordings. Jerry Gonzalez, Steve Turre and Grover Washington, Jr. died from a heart attack on Charles Fambrough’s home in Allentown, PA. He had been suffering from several serious conditions, including congestive heart disease and end-stage renal disease. Benefit concerts in Philadelphia had been held in the past few years to assist his family with the mounting medical bills. Allmusic