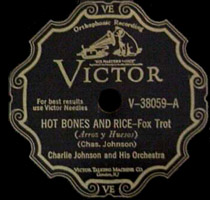 Charlie Johnson was a decent pianist, but rarely soloed. He is most famous for leading his Paradise Ten orchestra, which had five great recording sessions between 1925-1929 and played at Smalls Paradise from 1925-1935. Johnson’s sidemen include Jabbo Smith, Thomas Morris and Leonard Davis; the trombonists Charlie Irvis, Jimmy Harrison, and altoists Benny Carter, who made his recording debut in 1927 with Johnson; and Benny Waters, tenor-saxophonist. Their recordings generally live up to their great potential. Charlie Johnson was the leader of his band from 1938 to 1938. He freelanced until his death in 1950. Allmusic