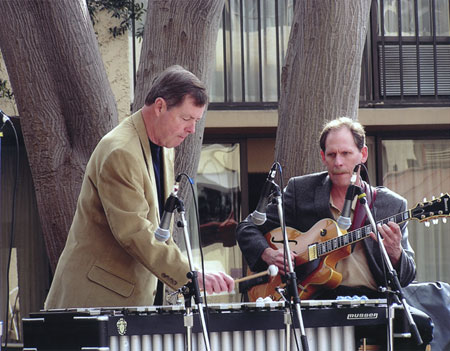 Charlie Shoemake, Vibes’ current Chase Music Group CD (CMG), is called “Vibes Master”. This moniker is indeed appropriate. While Shoemake was a fundamentally classicalist, jazz critic David Steinberg from the Albuquerque Journal noted that Shoemake “is a jazz vibist” who believes in harmony and melody. Jay Harvey, of the Indianapolis Star News, described Shoemake as having a “shining liquid sound” and that his perfectly balanced lines “float in it like a natural element.” Scott Yanow of the LA Jazz Scene noted that Shoemake is “a major voice” on his instrument, even if it’s not well-recognized. The Hartford Courant’s Owen McNally pointed out a shocking truth when he said: “West coast players are too often trapped in a kind of geographic limbo in terms of national recognition. Even excellent ones like Charlie Shoemake. They are not located in New York City, which is the capital of jazz media around the world. Word about their talents doesn’t travel well to the east coast because they’re not there. Charlie Shoemake was born in Houston, Texas, on July 27, 1937. Although there were no musicians in his immediate family, his parents were avid music fans and encouraged him to begin piano lessons at age 6. He struggled to find the right balance between music and baseball in his youth, which led him to excel in both. He was a member the school’s city champion team and was awarded unanimous first team all-city. This attracted the attention the St. Louis Cardinals. While he had planned to go to Southern Methodist University in Dallas to study piano and continue playing baseball, he realized that it was more important to focus on one field in order to be at the top of his game. He left Texas in 1956 to pursue a career as a jazz musician. Quote: A major voice in jazz vibraphone…quote Scott Yanow, L.A. Jazz Scene. The 1950’s were a period of intense study. He was trying to learn the concepts of his idols, Charlie Parker, Kenny Dorham and Bud Powell, as well as those of other greats such as Fats Navarro and Clifford Brown. In harmony, informal lessons with Jimmy Rowles were extremely valuable during this time. Charlie Shoemake was a highly successful teacher of jazz improvisation. He is also known for his blistering solos off metronome markings. This meant that Charlie had to do a lot of accompaniment for singers. He was not happy with the “show business” commercial work. Charlie loved playing for Sandi, his wife. They had met at Si Zentner’s rehearsal in 1959 and were married in 1959. But Sandi was experiencing the same problems as young jazz artists. There was a lack of opportunities for young singers not involved in country western and rock n’ roll. She had to make a compromise and start working in studios, singing for commercials and with vocal groups. Charlie soon followed her example. Charlie and Red Holloway at The Hamlet spacer Charlie and Red Holloway (c) Photo Talsan Musik In his senior year of high school, he began to play the vibraphone. This was an instrument that he had always loved. Victor Feldman inspired him to return to the vibraphone in the early 1960’s in an attempt to find a new direction, away from the “showbiz” mode he was trapped in. Victor Feldman’s advice and support made it possible for him to get back into studio work quickly. He began playing the vibraphone, other mallet instruments, and other percussion instruments for composers like Quincy Jones and Lalo Schifrin. He continued this until 1966, when he attended Shelley’s Manne Hole to see the George Shearing Quintet. Colin Bailey, the quintet’s drummer, told him that George, the vibraphone player, was leaving the group and that George needed a replacement for the 5 week Midwest tour that was about to begin. After some reflection, Charlie accepted the job. He didn’t realize that the five-week tour would become almost seven years. The group’s personnel included Joe Pass, Pat Martino and Ron Anthony, as well as Andy Simpkins, bassist, and drummers Harvey Mason and Stix Hooper. QuoteCharlie’s playing and compositions are unique. He hasn’t received the recognition he deserves because he isn’t from the west coast. I think I would like to play more with him…quote: Hank Jones Charlie felt the need to make a change at the beginning of 1973. He wanted to be with Sandi (born in 1960), and he thought opening a jazz school in Los Angeles would be a good idea. He was right. Charlie was the only instructor of the school. By 1990, over 1500 people had come to Charlie for jazz music guidance. Many of these students went on to have successful careers. Ted Nash and Tim Armacost are both saxophonists; Trombonist Andy Martin is a trombonist; Trumpeter Kye Palmer is a Trumpeter; and Keith Saunders and Cecilia Coleman are pianists. Charlie’s early teachings are credited by smooth jazz musicians like Richard Elliot and David Koz. Charlie was a great musician in his time with my quintet, but he’s even more so now. George Shearing. Charlie left Los Angeles in the spring 1990 to relocate 225 miles north to Cambria. Cambria was to be their home base, while Sandi would perform in other parts of the globe. They noticed that there were not many major jazz musicians in Cambria. So they approached The Hamlet, a fine restaurant overlooking the Pacific Ocean. It was the fall 1991. 15 years later, almost every major jazz artist on the west coast, as well as many from Europe, has performed there. All the visiting artists are treated to appearances by Charlie and Sandi. In 2005, the Shoemakers collaborated with some of the most prominent west coast jazz musicians to record a new recording (arranged by Charlie for all Sandis’ vocals). Charlie said that this was the Sandi Shoemake’s definitive recording. They talk about the beauty and purity of Sandis’ sound in the Leonard Feather/Ira Gitler jazz encyclopedia, but this recording also shows that she has great swing. Today, very few female vocalists can match this combination. from http://www.talsanmusic.com