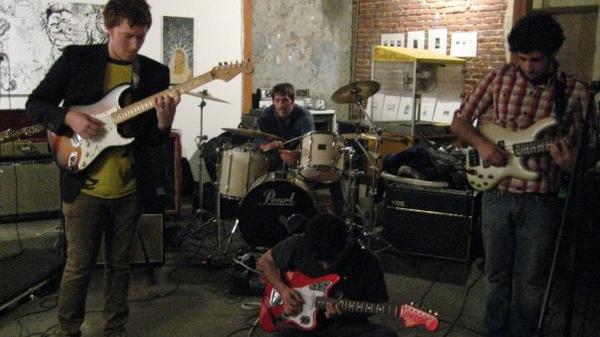 Charts and maps have been difficult bands to understand. Both their first and final shows were attended by me. I witnessed them transform from a chaotic mess of good ideas twisted together at angles into one of the most forward-thinking and electrifying live bands in Los Angeles. Dead Horse captures their live performances with more intensity than any other recording. This recording was made at the band’s highest point, just before their last performance at the tail-end of 2009. They were both a clammy band with huge creative loads. The Heard of Elephants family tree is a great resource. It can get a little complicated. Khawaja (bass), Melancon and Allison (sax/vocals), currently play in Woolen. Random Patterns is Melancon, Allison, and Watford (guitar), and John Taylor is part of Semiconscious Gloria. Their music is a convergence of many diverse tendencies. They’re one part ballsy big band jazz, another shimmery post-rock act with walls of melodic sound, a mathy-but-not-calculator-mathy garage-prog outfit, or an ill-tempered funk band with bad intentions — all underpinned by an almost reckless sense of imagination, deep, grooving beats and eloquent, nimble lead melodies. http://www.last.fm